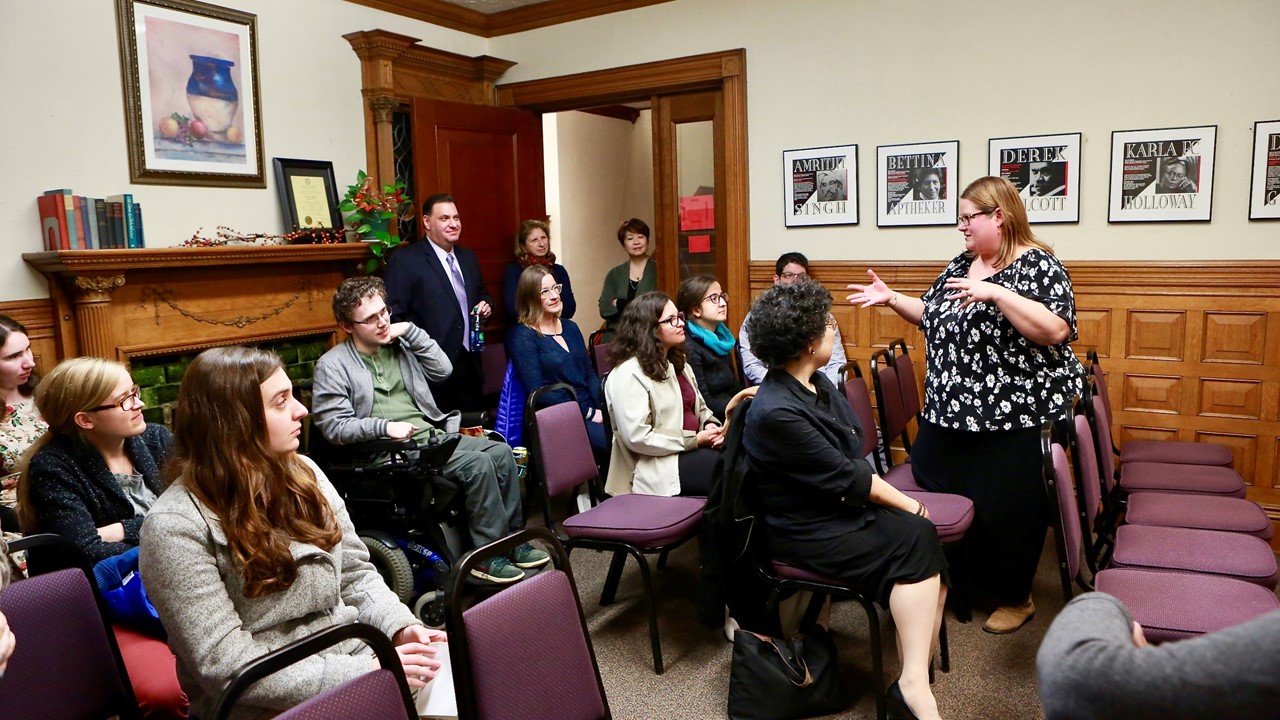 Of all the events that the English department hosts, perhaps one of the most charming is ChowderFest. This year we all gathered together at the beautiful Anderson house with professors, students, alumni, and of course three big pots of steaming hot chowder! While this year’s ChowderFest was smaller than years past, it was just as fun. ChowderFest featured three English alumni speakers: Emily Haley, Kyle Brunel, and Hank Fradella. Each of these speakers came from a different field and experiences, but all found that their English education here at Clark gave them valuable skills for their career.

The first speaker, Emily Haley, spent eleven years on her undergraduate degree, taking time to go abroad and work with nonprofits such as the Worcester Art Museum, before settling in as the Chair of the English Department at Notre Dame Academy, an all-female college prep high school. One of her most interesting study abroad experiences was in Transylvania, where she studied Romanian Folklore while staying with a Count in his castle. Her other study abroad experiences were in Oxford, studying Shakespeare; Galway, studying creative writing and working at a bookstore; and Clark’s Luxembourg May term.

The talks moved from there into even more unconventional paths. The next speaker, Kyle Brunel, took a gap year in California after her freshman year here at Clark before deciding to study English. After graduating with her BA, she then decided to study architecture and achieved her Masters. Her study of architecture lead her to San Francisco, where she still works at Pencilbox Inc. creating innovative buildings for scientific research.

Our final speaker was Hank Fradella, who was an outlier in that he took only one English class here at Clark. Fradella majored in Psychology and used his degree to make his career in criminal justice. He went to law school, worked as an autopsy technician, a judicial law clerk, and eventually became a professor of criminology at Arizona State, where he still works as the Associate Director.

While these speakers may seem disconnected, there was striking overlap in the ways they all found the skills from their English classes worked their way into their careers. Kyle Brunel found that her ability to interpret client needs, write proposals and persuade clients through writing came from her skills in written communication and interpretation. Emily Haley used her English skills in her management and communications positions at non-profits, finding that her ability to articulate her points clearly in writing and verbally gave her an edge as a manager. Hank Fradella found that despite his hatred of writing, the farther he progressed in his field, the more of that writing he had to do. He had to write statements as a lawyer, reports as an autopsy technician, and publish as a professor

Indeed, this has almost been a theme in this year’s events. Earlier this year at the Open House, Scott Zimmerman said much the same about the skills he learned in the English Department and how he has implemented them in his daily work for companies like Nike, New Balance and Carhartt Inc. He cited English as his base for his understanding of different global and cultural perspectives, creating a narrative and defending his argument.

It was truly inspiring to see all these speakers with different backgrounds at ChowderFest, and lovely to see that while they all went in different directions with their education, they all gained so much from our English Department.