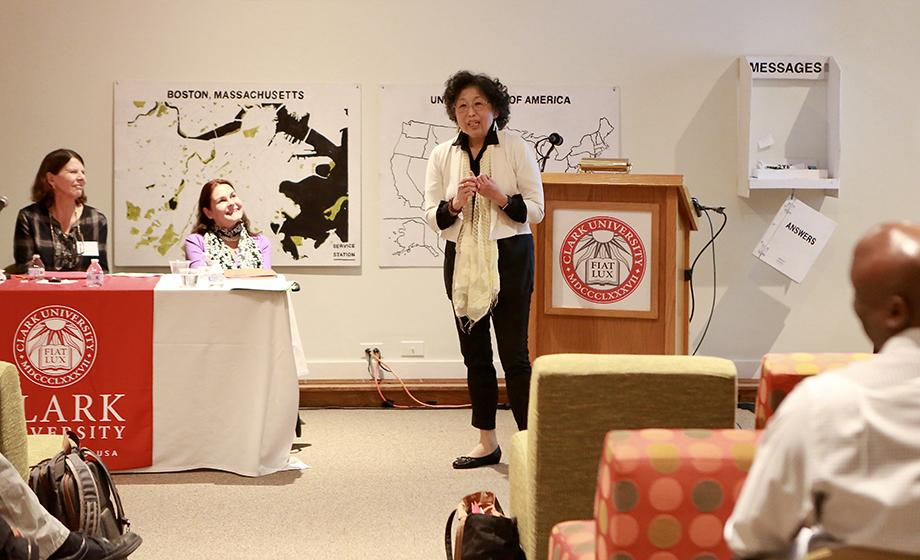 Students, alumni, faculty and friends recently gathered to honor SunHee Kim Gertz (pictured), professor emerita and senior research scholar in English at Clark University. Throughout her career, Gertz has championed diversity and inclusion, and the scholars recognized her contributions with the Global Cultures Alumni Conference, coordinated by Lisa Kasmer, associate professor and chair of the English department.

For current English majors, the Nov. 10 conference provided perspective on the impact of Gertz in her 32 years at Clark; for students, alumni and faculty, the talks provided a way to reconnect and converse over issues that continue to resurface in academia and American culture.

Below, Zachary Noel ’18, an English major concentrating in Africana studies, provides his take on the day’s events. Noel is a member of Sigma Tau Delta, the international honors society for English majors, which helped at the event.

When I arrived at Dana Commons to help set up the conference, there was a pleasant feel in the air as people reconnected with those they hadn’t seen in a number of years. I overheard Betsy Huang, associate professor of English, say to another attendee, “No way, has it been 10 years?” It was great to see the smiles on people’s faces as they caught up with their old friends.

The conference began with opening remarks from Lisa Kasmer, associate professor and chair of the English department. She gave a lovely introduction to Professor SunHee Gertz, who greeted her fellow colleagues and past mentees. The session’s plenary speaker, Sarah Stanbury, Distinguished Professor of Arts and Humanities at Holy Cross, then gave an amazing talk about the idea of home.

Here is a sampling of the talks: