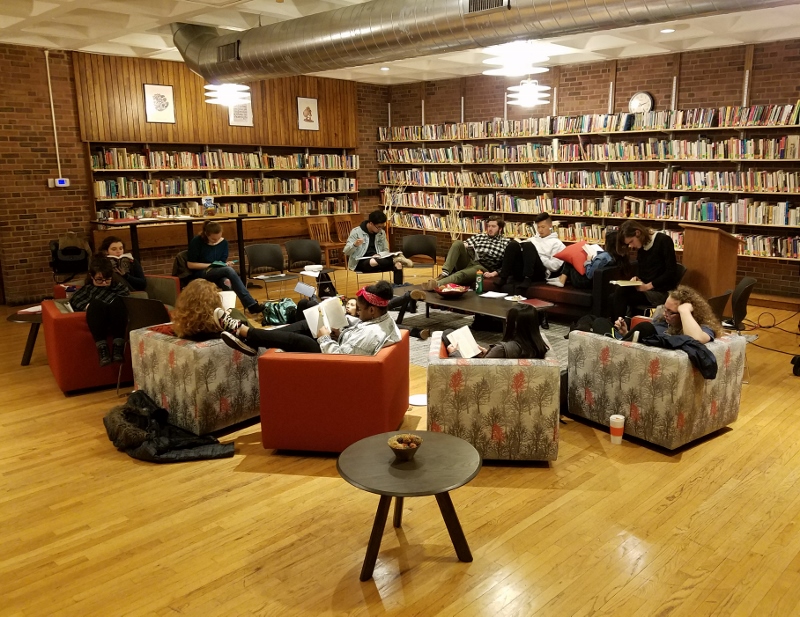 “What is the point of studying English? What will you do with it?” These are questions that every English student is familiar with. For the more reluctant students, these interrogations can be the impetus to study other disciplines, to find other paths. They can also be a source of fear and anxiety or can lead to valuing STEM fields and programs over the humanities. They ask the student where their values lie: do they want to do something that has been deemed “not valuable” and merely pleasurable?

In a recent article for The Chronicle of Higher Education, writer Geoffrey Galt Harpham tackles these questions, arguing not only that literary studies is important and pleasurable for the student, but also vital to our democracy. He argues that the ability to interpret and form opinions on texts forms the fabric of American experience, whether that be a civilian’s understanding of the Constitution or a Supreme Court Justice’s ruling: he argues that this ability is what led to abolition, women’s rights, and the continuous challenges to the Constitution since its creation.

Harpham gives historical evidence for this claim, moving from the rebellious principles of the Puritans (who believed that everyone had the right to interpret the bible), to Frederick Douglass’ literal interpretation of the Constitution to fight for abolition, to the creation of American education– its ideals, its goals and its centrality of English in the program of liberal studies. He argues,

Despite violent disagreement about how the connection between the discipline and the nation might be realized, everyone seemed to agree that what English teachers did, and especially what they thought about interpretation, had political and cultural implications.

The ability then of American citizens to interpret text well, and how they are taught to do this, is vitally important to our society and our government.

These historical examples provide the basis for his next argument, that opinion is the basis of democracy. Harpham argues both that we must as citizens of a true democracy be allowed to have an opinion on all matters of state, indeed, that many of our institutions (such as the Supreme Court) base all of their rules on the “opinions” of their members and that,

The debatability of opinions marks a deeper freedom of thought that is central to democracy. Indeed, one of the most committed advocates of the American Revolution, Hannah Arendt, argued that the “right to opinion” was the very foundation of the “right to have rights.” (Harpham)

But he also argues that the reason we care about the teaching of English and the main principles we use for interpreting texts must be organized and disciplined,

If opinion could not transcend itself through discipline and good faith, if people did not learn what Douglass called the “rules of interpretation,” opinion would degenerate into an unsorted mass of groundless assertions, speculations, rumors — a plague of fake news. If the country was to realize its promise, opinion had to be disciplined. (Harpham)

To achieve this discipline, he finds that New Criticism, a literary criticism that focused on the structure of the text itself, formed the basis of American English courses, and its methods echoed our understanding of how to interpret the Constitution. Its emphasis on evaluating the machinery of a text before attempting to interpret it in a wider context were useful in creating rules of interpretation that could be used outside of education. These rules of interpretation, which he says “mean the effort to divine the author’s meaning through a close study of the text and disciplined and informed speculation about context” (Harpham), are used by American citizens to interpret all types of texts, and this interpretation is what creates a good citizen: they allow the citizen to learn “highly developed forms of everyday activities of deciphering, decoding, and evaluating” (Harpham). This system of literary analysis gave way over time to myriad new methods, from feminist theory to postmodernism, which used the systems of deciphering texts to bring new knowledge and understanding of text and culture not just to English departments but to social understanding.

As a field, English responds to the world around it, either with the creation of new texts through creative writing, or through applying a new understanding based on contemporary culture. Given the rules of interpretation it began with, English cannot remain stagnant. It must be as variable and open as the people who study it are. It has to respond to cultural events and new theories because the art it studies is a manifestation of these events. All texts must be interpreted to be understood, and that interpretation changes as we as a society change.

We live in a text-based society in a country that was created with the idea that every person deserves a vote on the direction the country takes. While at the time the Constitution was written, not all people were seen as equals with this right, the principle was unique and powerful. Interpretation of texts, all texts, is important for the citizenship in such a country. English teaches us to interpret every text we see; it allows for multiple, even contradictory, interpretations as our culture changes. Since English provides a strategy for the interpretation of texts, it then allows us to change the way the law is implemented. The pluralism of English and the methods and the opportunities it provides to interpret the texts that govern us, Harpham argues, is at the center of our American citizenship.