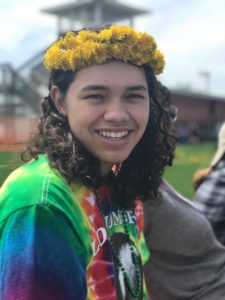 This essay was published by The Washington Examiner: https://www.washingtonexaminer.com/opinion/op-eds/welcome-to-the-freshman-class-of-9-11

The resident adviser in that building made a joke about one of the most tragic days in recent history. I showed this to my friends, and none of them picked up on this. None of my New England-grown friends realized the significance of the time nor date, and I was forced to explain it to them. The minute I saw the date my stomach twisted, the insensitivity of that joke, the careless nature, but then I realized that the majority of the students at this small liberal arts school haven’t grown up in a city where it is very much alive.

I have been raised by a parent who saw the second plane kill hundreds of people. I’ve heard her say, “The second plane hitting was like an optical illusion,” and “I had to walk from downtown to the upper east side to get you,” and “I went to check on my friend and he was covered in the ash of the dead.”
The crazy part is that, at 4-months-old, I must have watched the second plane. I watched the news over and over; the plane, the people running, the ash rising from the top, and then imploding in. It was a nice day. People were voting that morning until the unthinkable happened.
As the years went by, I would hear how Mr. C was running late for work but stopped to vote first, and survived because of it. Or how a girl missed school every year because her dad was one of the thousands dead, and how years later, at the 9/11 memorial museum, we all saw her dad’s name written on the wall.

I’m in a history course, and we held a moment of silence. The non-New Yorkers sitting next to me are talking about Justin Bieber and Lizzo. I can only think of the ash on people’s faces, the soot in the air, the phone calls, the smell of burnt flesh, the videos of people jumping, the crumpling of the buildings, and the skyline. I missed something I have never experienced, and yet it is part of who I am.
I can never forget, and I wasn’t even old enough to remember.
Faith Duggan was born and raised in New York City.