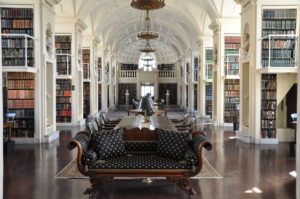 I had the privilege of spending the summer of 2019 at the Boston Athenaeum as a Boston University PhD Intern. The internship is intended to furnish BU PhD candidates with a taste of professional life outside the academy. Every morning, as I ascended historic Beacon Hill towards the Athenaeum’s imposingly classical, colonnaded building, I counted my lucky stars for availing me such an exciting opportunity.

My assignment was to conceive, design and plan a summer-2020 workshop introducing high school history and social studies teachers to the utility (and joy) of using primary sources—from the Athenaeum’s incomparable archives—as part of their classroom pedagogy. Considering the pending centennial celebration of the ratification of the Nineteenth Amendment to the Constitution of the US, also in 2020, I chose as my topic the struggle for women’s emancipation over the course of US history up to 1920.

The incredible richness of the Athenaeum’s holdings yielded a diverse range of documents and artifacts. Juxtaposing first editions of Phillis Wheatley’s poems with Abigail Adam’s infamous “remember the ladies” letter opened new vistas on the role of women in the American Revolution. Placing handwritten campaigning letters by Lydia Maria Child and Luisa May Alcott side by side with constitutions promulgated by working-class women struggling to set up self-education lyceums conveyed the intersectionality of women’s participation in nineteenth century reform movements. Broadsides making opponents of women such as Union General Benjamin Butler’s infamous 1862 “Women’s Order” as well as exhorting them to preserve the contents of chamber pots for explosives precursors and instructing them in the mechanics of assembling home-made slippers for distribution to soldiers subverted the ostensible wall of separation between women’s domestic and men’s public-martial sphere during the Civil War. The multimedia, multivocal and multivalent campaign of the suffragists, evident in a multiplicity of tracts, almanacs, music sheets, and playing cards illustrated unique political savvy on the part of standard-bearing movements championing women’s suffrage in the decades prior to 1920.

By summer’s end, I managed to curate a story of the long-nineteenth-century women’s movement as a story of US history up to 1920. I have been invited back to facilitate the workshop at the Athenaeum next summer. It is my hope that, as a result of attending the workshop, teachers will be able to incorporate primary sources from the archives as part of their classroom instruction. It is also my wish that these teachers will appreciate the importance of agency and contingency in history. Far from being the gift of male legislators in 1920, women’s suffrage was the fruition of actions and decisions of individual women, over the course of at least a century and a half, from diverse demographic, racial and class backgrounds. Further accounts of my summer at the Boston Athenaeum may be found here and here.

Arthur George Kamya received his MA in English from Clark in 2016.