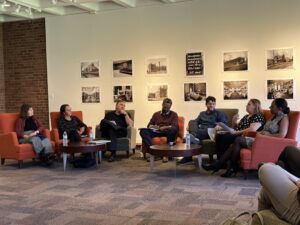 On Wednesday, November 2nd at 12:00 PM, students and faculty gathered in the Higgins Lounge in Dana Commons for “Truth and/or Fiction? Faculty discuss fictional depictions of the history of racial violence.” The event celebrated the publication of Professor Ousmane K. Power-Greene’s debut novel, The Confessions of Matthew Strong. Along with Professor Power-Greene (History and Africana Studies), a panel of faculty discussed depictions of historical racial violence in fiction.

Power-Greene began by describing his inspirations and goals for the novel. He began writing The Confessions of Matthew Strong in 2007 when he became motivated to examine violence as an integral element in the fight for social justice. Along with this, Power-Greene’s fascination with crime writing caused him to take on the issue of historical racial violence and use his novel as a space to explore how these histories should be relayed in fiction. By framing his presentation with an anecdote about his great-grandfather’s experience with racial violence in the deep South, Power-Greene expressed the deeply personal nature of these traumatic histories.

After Power-Greene’s presentation, each panelist had a chance to respond to a question posed by facilitator Professor Amy Richter (History; chair of the Department), regarding how historical violence is depicted in the work of their individual fields.

Professor Shelly Tenenbaum (Sociology and Holocaust and Genocide Studies), spoke first about how history-based films combine fact with fiction to depict instances of racial violence. She referenced films like Schindler’s List, about the Holocaust, and Hotel Rwanda, about the Rwandan Genocide, as examples of this. Tenenbaum criticized how these films distort the realities of history by focusing heavily on the small moments of goodness while glossing over the broader systems of oppression.

Professor Gino Dilorio (Theater) followed with a similar argument centered around theatrical displays of historical violence. Dilorio emphasized the value of plays like A Raisin in the Sun by Lorraine Hansberry in which characters and events are portrayed as complex to provide thorough accounts of historical racism. Instead of relying on narratives that aim to make the audience feel good, Dilorio argued that portraying the complete truth avoids sugarcoating traumatic lived experiences and makes for a more powerful drama.

Professor Stephen Levin (English) jumped in to comment on historical racial violence within postcolonial theory and literature. He explained how this field involves questioning many issues like the ones brought up in Power-Greene’s book, including how to accurately represent perpetrators of oppression. Levin articulated the importance of literature in grappling with the racialized violence that has and does occur because of colonial civilizing missions.

Professor Kourtney Senquiz (English) responded to the prompt by considering the relevance not just of facts and scholarship, but also of emotions in the experience of remembering. She explained that the literature of remembering allows us to search for answers, share experiences, and cope with trauma. These stories may not be enjoyable to hear about, but they are crucial to more fully understand historical lived experiences and prevent racial violence from occurring in the future.

Finally, Professor Esther Jones (English; Dean of the Faculty), spoke about how pieces of media such as Power-Greene’s novel give audiences a space to make meaning out of histories that don’t make sense. They allow room for varied perceptions of truth surrounding historical events and help us to make connections between empathy invoked by literature and ethical ways of engaging with these truths. Jones closed with an explanation of the inter-disciplinary nature of the novel form and how it can bring together sociology, politics, and other disciplines to demonstrate the complexities of a historical moment.

Power-Greene then thanked his colleagues and summarized his thoughts in response to their comments. He reaffirmed the importance of understanding and explaining historical contexts that may not make sense to contemporary readers. He also related his novel’s happy ending to the overarching theme of seeking light within a dark past.

Following the presentation, Amy Richter began the Q&A portion by posing a question to the students in the audience. She inquired about how students prefer to be taught this type of difficult or sensitive material. One student chimed in to say that we should be taught both the good and bad parts of history, so that we feel something, whether that be good or bad. Another student commented on the importance of addressing topics that make us uncomfortable, so we learn to confront issues before they go unchecked.

After this discussion, students began directing questions at the faculty panel. One student asked why it is important to understand perpetrators, specifically in the case of Power-Greene’s novel, white supremacists. Power-Greene explained that the oppression he experiences is “just a part of me” and creating a fictional perpetrator allows him to reason with this and analyze the views of white supremacists artistically. Furthermore, this draws attention away from existing perpetrators, and instead brings history to life though fiction.

Another student questioned what benefits historians can glean from literature. Power-Greene responded by assessing how effective literature helps people contemplate and understand what happened in the past. With this, art surrounding traumatic histories can also cause the public to develop interest in relevant pasts that are often overlooked. Concluding the discussion, Power-Greene asserted that stories make facts into experiences by injecting emotion and producing empathy in the audience. Thus, fiction helps us to share stories that are often left untold.

Professor Power-Greene’s book has been praised by many including The New York Times and Penguin Random House. It is available for purchase on Bookshop.org and most other book sellers.