CW: brief discussions of sexual, racial, and homophobic violence as well as some “citational swearing”

On Thursday, October 20th at 4:30pm, Kristen Leng, an associate professor of Women, Gender, and Sexuality Studies at UMass Amherst, gave her first public talk since the pandemic on her current paper in progress about the Lesbian Avengers and their use of queer feminist humor.

She began her talk with a joke: “how many feminists does it take to change a lightbulb?”

She described the various responses that may result from this satirical joke. Either, “None, because feminists can’t change anything” or “She can’t, because the world revolves around her” or simply, “That’s not funny.”

This provided a launching point for Leng to begin her discussion of how, “The myth of the humorless feminist stereotype has deep roots in American culture.” And for Leng, who has graduate training in feminist history, “It became abundantly clear to me that feminists had been wielding humor as a political tool for at least a century.”

Leng’s central ideas pivoted around her belief that “Humors operations are latently queer.” She emphasized that,  “Queer in relation to humor is used not just as an adjective but as a verb” and that, “To queer is often treated synonymously to question or to interrogate.”

This primarily “Takes aim at heteronormativity” in an effort towards, “Claiming space, public and rhetorical… space that becomes marked, if only temporarily as queer.”

Leng mentioned that the feelings that humor stems from are not always positive. However, this opens up a multivalency of queer feminist humor. 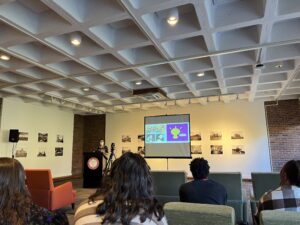 Leng beginning the lecture. (Photo taken by the author).

For those unfamiliar with queer feminist history, Leng gave background on the activism of the Lesbian Avengers, who were founded in New York in 1992. They focused on lesbian survival and visibility, as well as prioritized direct action of discussion groups. Central to the Avenger’s imagination and vision was humor. This stemmed from their desire to prove people wrong because lesbians were seen as not having humor.

Her talk was constructed from a brief history, followed by an analysis of four of their actions, primarily taken by the San Francisco Avengers, which she specifically finds interesting. Lastly, she included a conversation surrounding contemporary media coverage to assess how the activism of the Avengers was received.

The 1990s saw the resurgences of grassroots activism. Leng specifically named the ACT UP and anti-globalization protests. She mentioned that those alive during the ‘90s will remember the dramatic use of street theater. She emphasized the public perceptions of the die-ins, which were to protest the AIDs crisis and the pharmaceutical industry taking advantage.

In terms of queer feminist activism, the 1990s saw the third wave of feminism, which began to probe its existing positions on gender and sexuality. During this time, activists became more and more savvy at creating media, as well. Leng spoke about the reception of the relatively positive forms of queerness that emerged in the 1990s. She outlined the brief appearance of lesbian chic that came with a rising fascination in lesbianism, such as the Vanity Fair page of Cindy Crawford pretending to shave k.d. lang, a country singer who had just come out.

Leng also acknowledged some of the negative cultural aspects, such as restrictive welfare reforms, restriction of prime bills, the Defense of Marriage Act, and the emergence of Don’t Ask, Don’t Tell in the military.

Leng went on to cover the four events that the Lesbian Avengers responded to. The first of which was the 1991 murder of Hattie Mae Comins and Brian Mock, who wee burned alive in Salem, Oregon in their home. Neo-nazis had thrown molotov cocktails into their home, and the violence and brutality of the murders led the Avengers to use more aggressive tactics.

The second event that Leng discussed was from September 9, 1992 in Middle Village, Queens. She spoke about a protest that they held when School Board 24 rejected the rainbow curriculum, which was an effort to promote diversity in schools. They created a carnival atmosphere, handing out balloons to children. This was a direct effort to challenge the stereotype of the down and dowdy lesbian. There were marching bands and a “Teach about Lesbians” pink banner. The activists engaged with onlookers in a positive way, as featured in the video clip that Leng showed from Lesbian Avengers Eat Fire, Too.

Not all Avengers actions were so jubilant, especially when dealing with sexual violence. Leng also spoke about John and Lorena Bobbitt. Lorena Bobbitt cut off her husband’s penis while he was sleeping and disposed of it in a nearby field. Her trial detailed years of sexual abuse, and it revealed that her status as an immigrant had made her more vulnerable to abuse. Leng also spoke about Sharon Bottoms, who was a clear example of lesbian discrimination. The custody of her child was awarded to the grandmother, based on the fact that Bottoms had engaged in illegal sexual acts.

The Lesbian Avengers responded to these events by holding a “weeny roast.” They grilled hot dogs to bring attention to the harm that these women had experienced from men. Leng raised: was it, “Purile and grotesque pleasure in the vengeful joy of burning the penises of a rapist and a homophobe, or was it intentionally shocking to perform satirical and queer work to serve as a vehicle for the object of female consumption?”

The Avengers ultimately “rendered the penis into a joke by reducing it to a grillable weeny.” According to Leng, “Their action capitalized on the media fascination with the grotesque incident and subverted it at the same time.”

The last event that Leng detailed was the Plague of Locusts, which targeted conversion therapy by the right wing organization Exodus International in Februrary 1995 by releasing crickets. One of the quotes that Leng read was, “There are lesbians here with bugs.” They were calling out Exodus Chapter 10 verses 4 & 5. By appropriating the bible, they were trying to hold homophobes to account. The action was not just another form of playful vengeance, but a satirical act playing off of the Bible, which was usually justified against gays and lesbians.

All of these forms of activism took place within 3 years, which mobilized the queer gesture and “inspired affinities across difference.” Despite this, there was some hostile reporting about the Lesbian Avengers, even within the queer community. They were worried about backlash from the straight community.

Leng ended her talk with more provocative questions for the audience. “Can an action that is queer in moment retain that queerness in the future?” and “Is it fair to experience humor and queer critical edge to hold-up over time?”

In the Q&A after the talk, attendees had the opportunity to ask Leng questions about the subject matter.

One of the students inquired, “In terms of the specific actions that they took, aside from the publicity, what do you think was the other advantage or weapon that they used to do the things that they did?”

Leng responded that for the Lesbian Avengers, humor was doing work for them. “Humor can be really disarming and not necessarily in a non-threatening way…. This story [about Lorena Bobbitt] was covered in a salacious way. They were obsessed with the penis of it all. It was already a humor laden event.”

Leng emphasized, as she did in her talk, that humor allows new possibilities to take place.

Brett Iarrobino, B.A. ‘21 M.A.T. ‘22 said, “Thinking about how nihilistic the last few years have been, can you think of any contemporary moments that had any sort of humor or production value that was similar to the Lesbian Avengers, and are they still coming from queer feminists?”

Leng seemed optimistic about current activism, despite its less impressive acts in comparison to the Lesbian Avengers. “As controversial as the Women’s March was, there were some interesting things happening. The pussy hat was a small gesture, a small attempt.”

She also mentioned the effort entitled, “Periods for Pence.” As governor of Indiana, he introduced a law that was eventually overturned, but he wanted there to be a funeral for every stillbirth, abortion, etc. and people flooded his office with news of their menstruating to overwhelm his office in a slightly humorous way.

The event was the last in the Queer Comedy Presents series.