In the early evening of Wednesday, October 19th at 5:00pm, the English Department hosted its annual celebration “Chowder Fest” back in English House for the first time since the outbreak of the COVID-19 pandemic. In the fall of 2020, the celebration was held over Zoom, and in the fall of 2021, the event was hosted in ASEC with the chowder outside to adhere to space capacity and social distancing policies.

Despite the return to the original venue, life is not completely back to normal. Masks remained worn by students and faculty during the presentations, although they were removed for the consumption of soup.

The celebration began with Professor Meredith Neuman, the chair of the English Department, announcing the recipient of the Carter Prize, which is awarded to a graduating senior who demonstrates the most depth and breadth of learning, intellectual curiosity and engagement, growth over time, and contributions to the community and culture of the department. The prize was awarded to Christina Rose Walcott. The Department extends its congratulations to Christina Rose.

Tess Walsh, who currently works as the Technology Training Specialist at Clark University, offered encouraging advice to the resident majors that things may not always go as they originally planned. She expressed that when she taught her senior year it was a harrowing experience for her and the ninth graders that she was instructing. She expressed how, “I left the classroom each day wondering how I was going to stay awake long enough to eat dinner.” 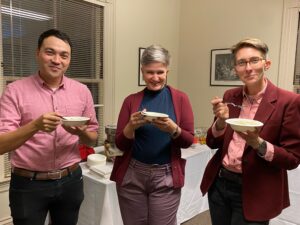 Her comment that, “English majors boo and hiss anyone who works in STEM” was met by laughter. She joked how this was, “a strange turn of events that I never saw for myself.”

Walsh had completed a master’s thesis at UMass Boston and thought about pursuing a PhD, but she ultimately began applying for jobs due to finances. “Ultimately, I didn’t get a PhD not because I didn’t love it but because I was broke.”

“I ended up working in customer service at an educational technology start-up.” She didn’t enjoy it, but it provided her the gateway to technology. She spoke about how there are gaps in the field of STEM where people don’t know how to communicate, and that’s where she comes in.

She expressed: “I use my English degree every single day in my job, and that’s because technology without accessibility, without clarity, without practicality is not helping anyone.” Ultimately, Walsh illustrated how her ability to effectively communicate has helped her to make technology a more accessible space.

Tracey Walsh ‘07 is currently an editor at Bloomberg who focuses on environmental and public health issues.

She began her presentation by commenting, “I went to Clark because I wanted to challenge convention, change the world.” She expressed how when she was attending Clark, it felt like there were a lot of things wrong with the world and a lot that she felt needed to be changed.

She said to herself, “Maybe the best thing that I can do to change the world would be to go into journalism…. I have been moderately successful at that. I have not changed the world fully yet.”

In speaking about the value of her Clark experience, she reflected positively on how her semester abroad in London opened up her 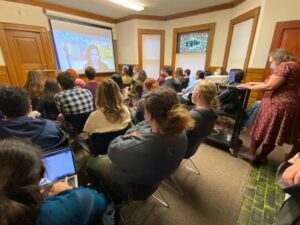 publishing experiences, as well as noting that, “Relationships at Clark have been incredibly valuable to me.”

Walsh also spoke about the real world applications of literary theory and cultural theory, saying: “those classes really taught me to think critically about how discourses are constructed…” but in regards to her very niche undergraduate thesis, she said: “I have not figured out how to work that into journalism.”

She did express that, “No matter how esoteric your area of research, there is probably a way that you can connect it and speak about the world in that respect.”

Walsh was not only encouraging towards undergraduates in thinking of the big picture, telling them: “Don’t be too hard on yourself if you don’t immediately change the world,” but she also told them, “I have social anxiety issues, and I want to let you know that if you do, you can have a job in the real world.”

The last speaker of the evening, Luis Santos ‘21, graduated from Clark in the middle of the pandemic. He recalled: “I finished my senior year completely virtually. I was at home with my family in Fall River, which is where I grew up.”

In a job search, Luis said that he was specifically looking for a “transition” or “Opportunities that would lead to other opportunities.” He spoke about attending Career Connections Center events and how this helped lead him to two job offers and ultimately his current job with College Advising Corps – Boston University (CAC-BU). Santos works at a high school where he is a college and career adviser for students.

“CAC-BU places recent college graduates in the Boston and Greater-Boston high schools. We serve in these high schools for a year or two and do a lot of the guidance counselor type of job [and serve students] in their next steps after high school.”

Santos spoke about the benefits of this program and how it has allowed him to take classes concurrently at BU as a non-degree student. He suggested to undergraduates that if they are presented with similar opportunities, to look into a program or job that offers tuition assistance. “I’m now officially a student at BU working towards my master’s in education.”

After the presentations, students had an opportunity to ask the speakers questions. One student asked about what specific skills that the speakers learned in a class that ended up being transferable.

Santos articulated that for him this was, “Conveying your message to an audience”, “Being careful with the message”, and “When you’re writing something, it’s important to get feedback, which was a practice that I learned as an English major.”

Tracey Walsh spoke about the value of research, which is an essential and valuable skill in her career as a journalist.

Gaby DiPinto ‘23 asked, “I feel like there’s kinda that common myth that every person who goes into being an English major sees it as a useless degree. Do you feel like you get any feedback on people who are hiring people with an English degree see these as applicable skills or is this something that you have to explain for yourself?”

Santos answered, “Overall, it depends. With the job search, some employers just see that you’re getting a Bachelor’s. I wouldn’t say that they make that assumption. They just see that you went to college, and that you have value.” 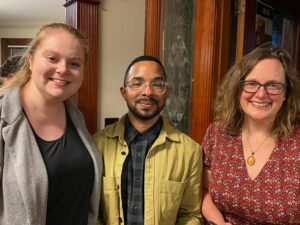 Tess Walsh agreed. “Nothing boils my blood faster than hearing people say that English is a useless degree. Because do you know what those people can’t do? Write a sentence… If anything, it’s usually seen as a positive because if nothing else, they know that you’ll be able to write and that’s always something that’s helpful.”

If you missed Chowder Fest and/or are interested in reaching out to any of the presenters, they all expressed their willingness to connect with students! Please reach out to the department chair, Meredith Neuman (mneuman@clarku.edu) or the departmental administrator Paula Flynn Connors (pconnors@clarku.edu) if you are interested in connecting with any of the speakers.