Robin Tran visited Clark University for the second event in the “Queer Comedy Presents” series organized by Professors Elizabeth Blake and Rox Samer. If you are interested in getting to see her in action, the stand up comedian was recently featured in That’s My Time with David Letterman, and her Instagram is @robintran04.

Clark University students, faculty, and community members appeared to be thrilled with the extraordinary wit and bluntly honest stories that Tran divulged. She covered a variety of topics, from her experiences as a transgender woman to the racism that she experiences as a Vietnamese-American. 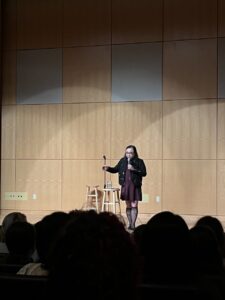 From the moment that Tran said hello to the audience, she was welcomed by a friendly and receptive crowd. She commented at the waves of hello by the audience, “You waved! What a weird crowd,” and humorously expressed, “This is my first college gig” (crowd applauds)… “Lot of pressure on you guys actually!”

Tran’s popular opening refrain was met with laughs by the community. “I am transgender and that is a coincidence.” She continued, “The best thing about coming out as transgender is that people are no longer racist!”

Tran addressed the pressure that she sometimes experiences as a trans woman. “People want me to be some kind of hero for the cause, they want me to be brave… and I don’t want to be any of that… I want to be a transgender woman that starts shit for no reason at all”

Tran also confronted the hostility that trans people face, specifically in regard to using gendered restrooms, as well as the financial barriers that trans people face to receive gender-affirming care and surgery. She approached both of these serious issues with humor, finding a way to make people laugh about these predicaments.

Additionally, Tran spoke on the recent politics surrounding trans athletes. She began her joke with stating: “I just want to be a shitty transgender woman, but Caitlyn Jenner beat me to it…. Watching conservatives and liberals play hot potato over her….” Tran called out Jenner’s hypocrisy, observing: “She’s against trans women athletes, and she’s a trans woman athlete.” Tran concluded, “The only thing that I hate more than trans people athletes is all sports! I hope that they win everything because fuck sports and fuck you for liking sports. That’s my hot take… Just give them all the medals… but they’ll all be dead in a couple years anyways…” The crowd responded with silence here, until Tran delivered, “because we’ll all be dead from climate change!”

Tran tackled her queerness from multiple facets, specifically joking about the nuances that accompanied her coming out experience with her family. Not only did she experience a linguistic barrier between her and her mom, but she also considered the familial issues that pre-existed in her life, as well. “I don’t like my dad and the worst part about coming out as transgender was that he kept talking to me afterwards.”

One of Tran’s main focuses was her experiences as a Vietnamese-American. She spoke about the racism that she experiences, specifically in dialogue directed towards Vietnamese people. “I am Vietnamese, so I do not like Vietnam war movies because they just have a bunch of Vietnamese bodies on the ground… and then it goes to Tom Cruise’s face looking sad, and you’re like, ‘am I supposed to feel bad for Tom Cruise?’”

She elaborated, “Can you imagine if they did that to white people? If there was a sea of slaughtered white children, and they just panned to a Vietnamese man with his face like ‘yikes.’”

Tran appeared to reflect somewhat fondly on the COVID pandemic, first clarifying, “The COVID pandemic… you all actually believe in it here, right?” She asserted that, “Asian trauma prepared me for COVID… So when I found out from the CDC that I couldn’t go outside and had to wash my hands, I was like, ‘I’ve been preparing for this my whole life!’ I wanted to get an A+ in COVID.”

She spoke about binging TV shows, which most people can relate to for their pandemic experience. “During the pandemic, all I did was watch TV and jack off… Whatever, I didn’t leave my house for nine months.” She watched 11 seasons of Survivor with her fiancé, which appeared to spark a singular interest in salads as a meal. (It did not go over well for the two of them.) “I learned a lot about race watching Survivor. It’s a pretty racist show because it’s in America. I think that Black people are just not as good at lying as white people are… I’m just saying that white people are amazing liars. White people think that integrity is fucking gay.”

Tran was also very honest about her struggles with depression. “I actually overcame 25 years of depression 3 years ago… I literally thought about suicide every single day, since I was a kid… The only downside to that is that 2020 was the best year of my life. I just can’t tell anyone that. It was like winning the lottery on 9/11.”

“I remember the moment that it went away…. I’m looking out the window, and I just realize that I’m not worried about anything right now, and for the first time in my life, it was like a buffer on a video, and it felt like I was falling and trying to find a tree branch of something to worry about, and then it felt like I was flying…. And the first thing that my fiancé wanted to do was watch Chernobyl on HBO… she was like, ‘Let’s give this new brain a test drive… Let’s experience sadness in a healthy way’… But because of that, I now have fond memories when I think about Chernobyl.”

Tran concluded her sketch with tying up the convergence between her identities. “I feel like being Asian was like transgender training wheels… People want to fuck us but don’t want to admit it.”

“I came out as a woman three years ago, and I gotta be honest guys, being a girl fucking sucks, and I shouldn’t have done it. I went from being a chubby dude to a fat bitch…. You’re not a real woman until you don’t wanna be a fucking woman anymore”

During the Q&A after the show, Tran was asked a series of questions. Matthew Thomas Young (‘23) asked her “How do you go about writing your comedy and translate your everyday experiences into jokes?” Tran responded, “I talk out loud until I make myself laugh.” She continued to say, “I do a lot of inner work. I consume a lot of comedy that I like… like I’ll rewatch the same three seasons of the Simpsons, so if I can make me, as a fan, laugh.” She went on to suggest that telling a joke is a lot like writing a five paragraph essay, to the delight of the English majors in the audience.

Griffin Ford (‘23) asked, “I’m interested in the idea of comedy as an art form with an audience. Has there ever been a joke that you kept in a performance for yourself regardless of the audience?”

Tran responded, “Tiktok, Twitter, Instagram-they’re all like different languages. Standup is a different language. Standup is just like twitter now. Almost all of them are bad now. Everyone is just reacting to what twitter is doing…. I just wanted to shit on all of the modern comics. I think that standup comedy is in danger of being an endangered art form… Standup has the danger of being like Blockbuster video, and a lot of the comedians aren’t even updating the art form.”

When asked what their favorite part about the comedy show was, Brett Iarrobino, B.A. ‘21 M.A.T. ‘22 said, “I really appreciated how unapologetic Robin was in talking about identities and intersections of identities that Clark students really care about and have become really central to Clark’s identity as a campus in Worcester. I really appreciate how much Clark students were willing to trust Robin’s material, even when it pushed the envelope of what we’re willing to talk about as a campus, and I appreciated how despite pushing that boundary Robin was incredibly sensitive to the needs of the audience and was incredibly receptive and worked with us, and to quote someone from the audience (Claire McGrath ‘24), ‘actually talked to us than at us.’”

The final event in the “Queer Comedy Presents” series will be taking place on October 20th about the use of humor in lesbian activism in the 1990s.