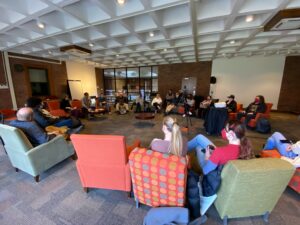 View of the conversation with Robin McLean and Michael Carolan. 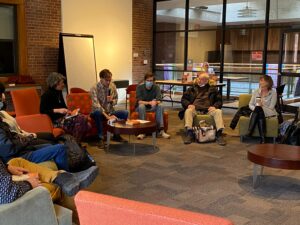 Speaking at the conversation with Robin McLean and Michael Carolan.

Robin McLean returned to Clark University to speak with Professor Michael Carolan’s “Creative Writing: Advanced Fiction” class and hold a discussion about her most recent fiction novel, which was an instant hit.

“They had quite the experience with Robin,” Carolan said.

Carolan’s class read McLean’s “Pity the Beast,” which is currently long listed for the Reading the West Prize.  “Pity the Beast” deals with readers’ assumptions around the Western ideals of good versus evil, masculinity and femininity, as well as the way stories are told. McLean is innovative in her language as well as the way she tells her stories, through the ideas of characters, time, vantage points, redundancies, and expansiveness. Many have called her work ambitious, inventive, and aggressive.

“Her writing wasn’t like anything I’d ever read before,” Jackson Chace ’25 said. “The meticulous care that McLean poured into every line of the story was evident. When she met with us, we discussed only the first ten lines of the story and that alone took us a half an hour. There is so much crammed into every word in that story, and the more you look the more you find.”

To McLean, though, she feels that the story itself is about the way we think.

“A lot of my interest as a writer is how do you achieve what you’re thinking right now,” she said. “A lot of what I’m playing with with time is big enough to allow me to explore the things that I want to explore.”

Within fiction, oftentimes people are consumed with characters and dialogues, McLean told the audience. However, she wanted to see how far she could push the idea of time.

“So much of her narration focused on just about anything beside the plot, which was jarring when I first began to read,” Chace said. “It was only when I let myself get a bit lost that I started to really appreciate the story for what it was.”

Chace said that in 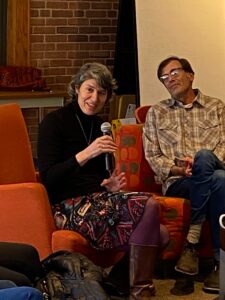 Robin McLean speaking during the conversation.

the first few chapters of “Pity the Beast” he kept trying to find concrete evidence of what was happening but found that was not the point of the story. He called it “avant-garde” in many sense.

“It’s this possibility that people forget that you can have in fiction,” McLean said. “No other art form has that possibility.”

McLean went on to say how writing is very different from anything else. Time is mendable and creative.

So that leaves writing with time that is often forgotten.

“Fiction is the most badass art form and people don’t use it,” McLean said. “So I thought I’m going to.”

McLean used to be a lawyer as well as a potter in Alaska prior to turning to writing her first stories. From 2012 to 2018, McLean taught a class at Clark University called “Monsters, Tales, and Going to the Dark Side,” which was popular, and as Carolan said, the “going to the dark side theme, can still be seen in McLean’s writing today, particularly in “Pity the Beast.”

In 2013 McLean won the BOA Editions Fiction Prize and was a finalist twice for the Flannery O’Connor Short Story Prize for her collection “Reptile House.” Her debut novel, “Pity the Beast,” was published in November 2021 and was called the best book of fiction of the year by outlets like The Guardian, Wall Street Journal, and White Review.