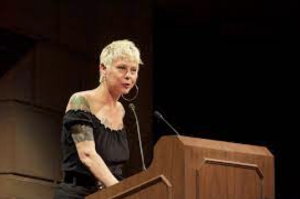 Daphne Gottlieb, who is a San Francisco-based performance poet, presented to about 15 Clark students last month as part of the Women in Horror Month celebrations.

Gottlieb is the winner of the Acker Award for Excellence in the Avant-Garde, the Audre Lorde Award for Poetry, and is a five-time finalist for the Lambda Literary Award. Gottlieb, who has also won the Firecracker Alternative Book Award, has been described as “fierce,” “unapologetic,” and “deliriously gutsy.”

She is the author of ten print books, five of which are poetry, one is nonfiction, one graphic novel, one short stories book, and two anthologies.

One of the works that Gottlieb read from is “Dear Dawn: Aileen Wuornos in her Own Words,” which is a collection of letters from Death Row written by the “first female serial killer” to her childhood best friend.

Other excerpts Gottlieb read from include “15 Ways to Stay Alive,” which looks into ideas of broken hearts, politics, dreams, and spiraling; “Dear Dawn” which follows Aileen Wuornos, a hitchhiking prostitute, who was condemned to the death sentence after she shot, killed, and robbed seven men in remote Florida locations that she claimed were acts of self-defense; and “Final Girl,” which is named for the only female character to stay alive at the horror movie and now must tell the story.

One poem from “Final Girl,” titled “My Mother Gets Dressed” showed the exquisite hold of English that Gottlieb has, with her ability to depict a scene and share multiple meanings of words at once, simply exhibited with the phrase “four days later she comes home in a  black box that’s heavier than it looks.”

Other memorable stanzas Gottlieb shares include “She screams to be touched. She screams when I touch her.”

Prior to the month of February and leading up to the day of the reading, students were encouraged to submit to a poetry contest that took place on the 9th as well. The written works had to be around a horror theme and/or from a female perspective within the genre. Gottlieb’s work was an inspiration for the contest, according to Morrill.

The first, second, and third place winners were announced during Gottlieb’s event, and each finalist read their piece to those present.

Maddy Whissler ’25 came in third place with her “Vengeance of the Night” poem. Whistler, who is intending to study polyscience, wrote about Jack the Ripper attacking women in the night except one woman lured him in to enact revenge “even though it put me in danger.”

Flora Trost ’24 came in second with her poem called “Laundry Day,” which depicted a dream that Trost had.

“It was an image that I had of taking an iron to the brain,” Trost said, “and it just went from there.”

Amanda Edson’s ’22 poem “The Hag” came first, and it was written in the shape of a broom. The senior in criminal justice studies in SPS wrote about a witch’s cauldron, eyes, kills, and desires.

The winning poems are as follows:

The oceans are her cauldrons

Bountiful with rivers of her shrills

Her eyes pooled with starred dust

And burnt with the pyres of her kills

The moonlight bathe over children’s graves smothered by her revolting respire; The October breeze, an enchanted disease, alit the embers of her desires

The desert storms’ her mortar and pestle

Filled with the sand of baby skulls

The earthquakes of her jealousy

Erupt in a timeless lull

to take an iron

and make you mine

and make you still

to smooth out the wrinkles in your brain

to smell the steam

and feel the rubber

between my thumb and forefinger

to have a flat and shiny surface

to write my name in thick, dark ink.

Vengeance of the Night

I have never seen a redder red

It’s because you attacked women of the night

Lurking in the streets just out of sight

And so I was willing to lure you in, mysterious mister

To avenge the killing of my prostitute sisters

Tear out their innards and make a mess of a scene

Ripping out their hopes and dreams

But I’ve been following you closely, and from what I’ve seen

You’re not so slick hiding your tracks, I’ve got a few tricks up my sleeve As to how I found you

I remembered you from a Saturday night The sun had just fallen, street lights bright You slipped down the alleyway

I followed you along the way

To see if I could entice you with my charms

But then I saw you snatch a woman in your arms

She didn’t have time to scream, the knife slitting her voice

I had to act quickly and run away, I had no choiceThat’s why tonight I lured you into my chamber

Even though I knew that it put me in danger

But I remember your round face and hooked nose

Your smile as you killed her, only I and Heaven know

The ghastly things you did to her

I guess that’s why they call you Jack the Ripper

So when I leaned in, I had to move sharp

And dig my dagger into your heart

You laid there moaning as your soul left your eyes

I licked the blade in spite, and to my surprise