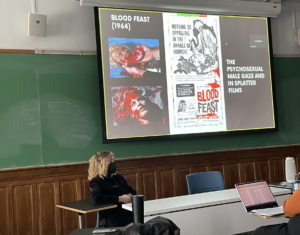 Mallory Trainer ’22 discussed video nasties, particularly as past of sexual violence in movie posters. Video nasties is a term popularized by the National Viewers’ and Listeners’ Association in the United Kingdom to refer to films, typically low-budget horror and exploitations, that were criticized for their violent content by the press, religious organizations, and general commentators.

Trainer focused on the deconstruction of the female form in different movie posters, including “Blood Feast” (1964) and “Captivity” (2007). There is a difference, Trainer pointed out, between entertainment and reality. These depictions dehumanize women and focus on the conflation of sex.

“You see the depiction of women’s values objectified,” Trainer said. “Their sexuality is the primary factor that draws the viewer to them.”

In “Blood Feast’s” poster, Trainer pointed out that despite their being blood all around, the woman’s face, hair, and breasts are still fully intact and visible. For “Captivity,” she noted that this issue continues into the modern day, as the depiction follows this sense of voyeurism within suffering.

“The women maintain a lot of their femininity,” Trainer said. “Is there is this very psycho-sexual perspective of the mutilation of women across the films.” 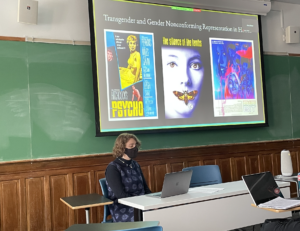 Mia Swartz ’22 talked about transgender and gender nonconforming representation within the horror genre.

“Marginalized individuals are often dehumanized simply for living their truth,” Swartz said. “Within the horror genre, the real life, pre-existing dehumanization of transgender and gender nonconforming people is exacerbated when they’re depicted as literal monsters.”

As these groups are oftentimes underrepresented in films in general, including the horror genre, Swartz pointed out that this also means that the few depictions that do exist are then dangerously rationalizing genderphobia due to their monster-like implications.

Swartz discussed “Psycho,” a 1960 film that follows a secretary who runs away to the Bates Motel (where she meets Norman Bates) with her boyfriend after stealing money from her employer. Bates dresses up as his mother.

“Norman is one letter away from the word normal, which alludes to his abnormal character,” Swartz said. “Norman includes the word norm. By following societal norms the majority of the time, he seems like a normal, non-homicidal person and thus is able to avoid a lot of suspicion.”

Swartz also mentioned Buffalo Bill in “Silence of the Lambs.” 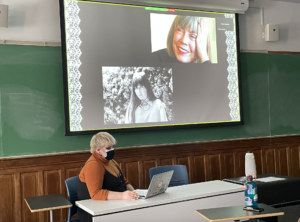 “Rice has always had a bit of a cult following since her start,” Reash-Henz said. “She had always been interested in deep spiritual interactions.”

Rice’s homoerotic vampire novels left an impact on the LGBTQ community, with an allegory to male homoeroticsm within some of her writing.

Unlike other horror films, Rice uses her monsters as heroes and anti-heroes, veering away from the vilainized trope of queerness within these movies, which Swartz discussed more of. 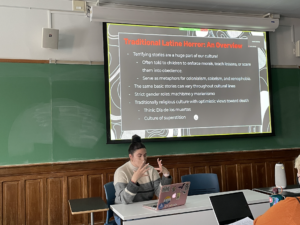 Anabel Riggio ’22 shared “La Llorona” with the group and spoke of folklore traditions within Latine horror.

“Scary stories are a very big part of our culture,” Riggio said. “They’re often taught to children to enforce morals, teach lessons, or scare them into obedience in a very religiously-minded and moral-focus on the culture.”

The Mexican folklore “La Llorona,” which means “The Weeping Woman,” varies in terms of details between versions, but the typical legend talks about a beautiful woman who marries a rich conquistador and has two children. One day, the woman sees her husband with another woman and in a fit of blind rage, she drowns her children in a river. Consumed by immediate guilt, she drowns herself and is forced to walk the earth until she finds her children.

“La Llorana” is tied to the patriarchal expectations of women in Latin-American culture. Riggio mentioned the idea of “marianismo,” which includes the complete acceptance of a man as the dominant figure. Women were seen as sexual objects.

“It’s essentially the idea that women without men are dangerous for children. Women should never be without them. They should never be raising children without men…It’s interesting the the job always falls on women and so does the blame,” Riggio said. “There’s been a lot of reclamations of the myth by women that reassess the story and show Maria as a single mother.” 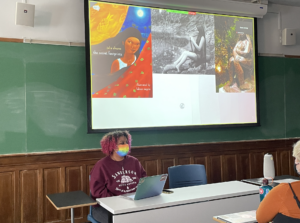 Dahlia Mella-Goris ’24 presented on post-colonial influences on folklore. She focused on the myth of the Ciguapa, which is a mythical creature within Dominican folklore that is typically an attractive woman.

The idea of the Ciguapa that Mella-Goris noted was that it represents erasure of indeginous identity. Cultures and stories have been lost, as many today do not consider indigenous tales and histories.

“La Ciguapa turned into the loss of tradition,” Mella-Goris said. “But people are taking the Ciguapa now as power and finally realizing that they are part of society. Through their activism, they can raise awareness of this issue.”

Today, people are reclaiming the Ciguapas, similar to how many are re-establishing Riggio’s La Llorana. Ciguapas are now seens as empowering, particular to those who were assigned female at birth (AFAB).

For this reason, Mella-Goris said that there needs to be more representation within the horror genre, just as other who spoke before her noted the need for more LGBTQ representation.

“I’m so tired of just seeing just white people on screen. Anytime there’s Black horror, people don’t get it,” Mella-Goris said. “There’s a lot of things…white critics and people don’t understand because they didn’t grow up on the south side (of Chicago when talking about “The Candyman”)…It just takes a lot to (reclaim) it because not everyone will take it seriously.”