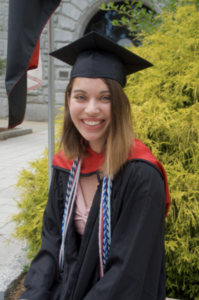 me at Clark, I have been set on becoming an investigative journalist. There was no doubt in my mind that, no matter what it took, I would get there. I created my own major. I studied abroad and away. I interned and freelanced at numerous papers, and I even created a 40 episode podcast with bonus episodes featuring people like CongressmanJim McGovern for my capstone.

Another dream of mine was to go to Northwestern’s Medill school. The University’s program is the best in the country. Through the investigative lab, about ten students each year study six months in Chicago and six months in DC, at which they have the opportunity to conduct an actual investigation and be published in The Washington Post.

Last month, I was accepted and will be attending Northwestern’s Medill Investigative Labs.

One personal statement piece that I submitted to graduate schools during my application process was inspired by an essay that I was assigned by Professor Valerio for my Women Writers II course during the spring of 2021. Professor Valerio tasked us with being more creative, something that I didn’t typically have experience with in other classes or with other essay writing. I decided to tackle the idea of fables. I wrote about my dad sharing stories with my brother and me, and I spliced it between sections about a few of the books we read in Women Writers II. For the applications, I took just the personal stories and reformatted it to coordinate with the application guidelines, adding some touches as to why journalism is meant for me.

Personal Statement, abridged version from what I wrote for Women Writers II class:

Before bed, my dad would gather my younger brother, Zach, and me into Zach’s room. The bedroom, covered in baseball caps, teddy bears, a wall-to-wall painting of Citizen Bank Park through the lens of what it would look like if my brother were hitting a homerun and numerous pieces of Philadelphia Phillies memorabilia, transformed each night into the setting of a new lesson or tale Dad would share. It started off with Aesop’s Fables – the famous slow-but-steady tortious beating the fast-paced, overcompensating hare, or the one about the crow who needed water but could not reach the few drops at the bottom of the vase until he became inventive and creative to find a solution. After Aesop’s Fables, Dad turned to other sources he found online: stories of defeat and triumph, fear and confidence, wit and deception, wisdom and ethics. Eventually, however, Dad ran out of stories to tell that Zach and I had not heard. There were not enough tales for his eager children with a thirst for knowledge.

And so, he created his own stories – stories that sometimes laid in truth and others that were pure fiction. Each and every tale, however, had a lesson at the end, something Dad wanted Zach and me to take away from his telling and ponder as we drifted away to sleep, sometimes with the stories even protruding into our dreams.

There once was a man who drove to the supermarket, Dad’s story started. He was in a great rush. There were no spots for his big, blue SUV that were close enough to the store. And he definitely did not want to walk far. But then he saw a spot – one up close, with a marking on the ground and a sign in front that both matched the color of his car.

The man quickly zoomed into the spot. He got out of his car in a huff, slammed the door, and walked into the market.

He was in a handicap spot, without a designated license plate, hanging sign, or sticker. There was no indication that he belonged in that spot. My dad said, your grandfather and sometimes your aunt as well, and people just like both of them, need spots like that, not someone who was simply in a rush to get their chores for the day done. With a number of handicap parking places required by law, each spot represents a safe and accessible location for the person who needs it. The parking space allows for a user-friendly journey from car to door. All customers are welcomed here, the spot says. This is not just a store that caters to able-bodied community members. We are committed to helping everyone, the spot states.

Yet, when someone who does not need the spot parks there, it loses its value, and the store becomes less accessible and accommodating to all.

So, in the story, Dad decided to wait there, to stand up to this man when he came back out. The man walked out of the store and came straight up to Dad in his tale, since he was standing by the car. He started to walk away, going toward his passenger side of the car, but Dad kept talking, following him as he went.

The man opened the door. His wheel-chair-bound brother waved “hi.”

And, so, my dad explained to us, you can never assume that you know everything in a situation. That man forgot his disability placard at home. He needed to run into the store to grab a quick meal, but he had to park at the handicap spot in case his brother needed to leave for whatever reason. It was inappropriate to simply judge the situation because of how one man looked.

I’ve taken this lesson and many others to heart. My parents both instilled an awareness of those around us into my brother and me growing up. Truthfully, this may have pushed me to go into journalism. I want to be able to highlight the different issues within our society and stand upfor those without a voice. I am able to make positive change through my writing and instill ideals within society similarly to how Dad would share messages with Zach and me with his stories.

You never know what someone else is going through and what part of the story you do not know yet, my dad said as he ended the story for the night.