It may not be Halloween season but ghouls, witches, and warlocks are going to hit Clark University’s campus this February as the campus celebrates Women in Horror Month.

“It is to celebrate a population of writers and artists that aren’t usually in the forefront,” said Jacqueline Morrill, who teaches interdepartmental/nondepartmental courses (IDND) including a “Writing: Horror, Serial Killers” course this semester. “I think it just has to do with that long running tradition of the ‘boys club’ in film.”

Women in Horror Month, which is in its 19th year, is an international initiative to encourage supporters to learn about the works of women within the horror industry. It was founded by Hannah Forman, who created a zine, which inspired the titular film festival, titled “Ax Wound: Gender in the Film Genre.”

Over the last half of a decade, the Women in Horror Month celebration has expanded to honor all people of marginalized communities.

To celebrate at Clark, Morrill, who said she has been “obsessed” with watching horror movies since she was 4-years-old, has employed a lot of her students to come up with ideas and support the program.

Prior to the month of February, a poetry contest will run, required to be around a horror theme and/or from a female perspective within the genre. The contest runs from January 17 to February 4. Submissions can be sent to jmorrill@clarku.edu.

The first, second, and third place winners of the poetry contest will be announced February 9 at “Final Girl” Poetry Reading with Daphne Gottleb, who is a San Francisco-based performance poet and winner for the Acker Award for Excellence in the Avant-Garde, the Audre Lorde Award for Poetry, and is a five-time finalist for the Lambda Literary Award.

The month of February starts off with a Menstrual Hygiene Drive. Products will go to Clark University students as well as Living in Freedom Together (LIFT) Worcester, a survivor-led and mission-focused recovery organization that not only provides direct support to survivors of sex trades but also addresses structural oppression by advocating for polices to help the vulnerable populations in the community.

The drive’s drop off location will be on the second floor of the Goddard Library next to the information desk. Items that can be collected include but are not limited to pads, tampons, menstrual cups, and liners.

There will be two movie screenings throughout the month to celebrate. The first, on February 4, will show “The Love Witch,” which is a 2016 film about a modern-day witch who uses her magic to get men to fall in love with her – even though there are some terrible results. The second movie is “Jennifer’s Body,” which is a 2009 film about a demonically possessed high school cheerleader who specializes in killing her male classmates.

“Everyone’s like ‘Jennifer’s Body! Jennifer’s Body!’” Morrill said. “It’s come back as this like cult classic years later. It’s crazy. I really wanted to make sure that it was our big shabang at the end of the month.”

On Valentine’s Day, Women in Horror Month will celebrate in the University Center with Bloody Valentines for Final Girls. “Final Girls” is a horror trope that refers to the last woman that confronts a killer, which so happens to also be the one to tell the story. Students will be encouraged to write and display their valentines for the Final Girl in their lives.

“We’re going to have simple arts and craft stuff where we can make a little Valentine,” Morrill said. “We’ll have photos of different Final Girls from different movies and display them on a spree day board.”

Everyone is encouraged to dress up as a Women in Horror character on the 22nd.

To Morrill, the events overall and holding a space for all students was important.

“I don’t think we have enough events on campus that includes everyone,” Morrill said. “I know that we have a lot of multi-diversity-cultural clubs and arts. Maybe even before Covid, I wasn’t really seeing events playing to the whole campus.”

Women in Horror Month is supposed to be that gap filler.

“No matter what club or discipline or major,” Morrill said. “I think this can be something that everyone should know about and participate in. I think that we need that as a campus coming back from Covid…I wanted it to be fun.” 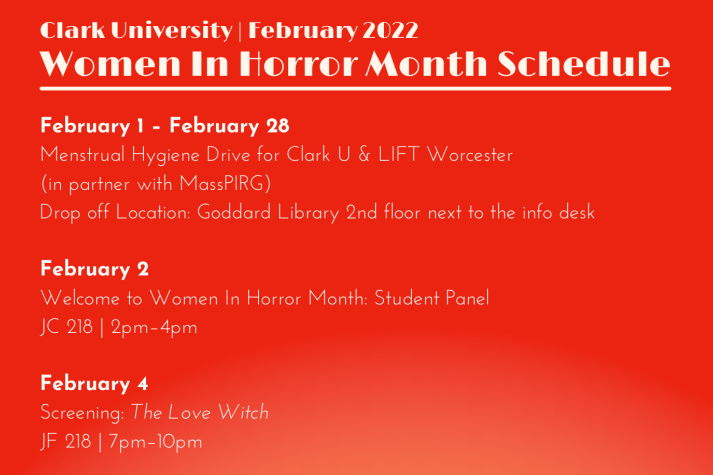 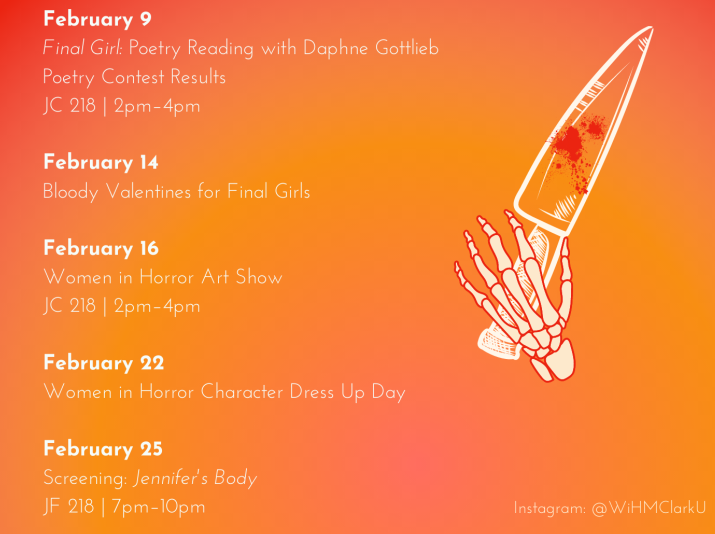