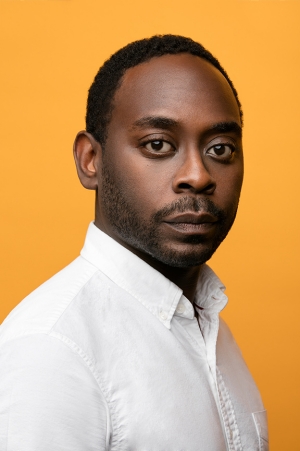 Assistant Professor Justin Shaw’s “Advanced Studies in Shakespeare” have gone beyond typical studies of The Bard to explore race, health, sexuality, and more. Students have read a variety of stories, but recently they were able to dive deeper into James Ijames’ “Fat Ham” after the playwright visited the class.

Ijames’ play is a modern take of Shakespeare’s “Hamlet.” While the storyline lies in the poet’s original works, Ijames’ modern take sets the play in the South among members of a Black family that runs a barbecue restaurant called “Fat Ham.” There is a self-awareness of the characters as well, which many of the “Advanced Studies in Shakespeare” students compared to previous plays they read in the class, including Jackie Sibblies Drury’s 2018 play “Fairview.”

Morgan Green’s filmed production of “Fat Ham” for the Wilma Theater in Philadelphia follows Juicy (played by Brennen S. Malone), who is the Hamlet lead and is a young man taking classes at a for-profit online college – his late father (played by Lindsay Smiling) even calls it a scam. Like in “Hamlet,” Juicy’s uncle is motivated to now marry his widowed mom, hopefully also taking over the family restaurant while at it.

Ijames sent the “Advanced Studies in Shakespeare” class the script and video adaptation. He then talked with the students virtually.

“It was a much more intimate thing,” said Penny Amara ’24. “We really got to delve into the parts we really liked with him directly, which was really cool.”

For Mitchell Navon ’23, he said that the experience was more engaging and interesting than just reading a script in class.

“You got to hear the author’s thoughts directly,” Navon said. “Most of the time you just hear a pre-done presentation…and that’s all we get.”

Ijames works to unveil the resilience of the Black community, queer discovery, and more as he is turning original plays into a cultural spin around tragedy and racism.

“When you read a play, a lot of it can be up to interpretation,” Amara said. “It was cool to hear how personal the play was to him. A lot of it was based on his real family. A lot of the names had cool and interesting meanings, and he tried to portray his own life into it.”

For Shaw, he added that the personal aspects of the play really hit home with him and his class.

“That was surprising at least for me,” Shaw said.

While Juicy is considered the atypical hero like Hamlet, he also is called “a big ole sissy,” wears a T-shirt to a wedding banquet that calls himself a “Momma’s Boy,” and is both asthmatic and “thicc.” Juicy’s misfit identity plays into what the “Advanced Studies in Shakespeare” class were able to discover in terms of discovery and resistance.

“The play was interesting and then we actually got to hear James talk about the creative process,” Shaw said. “He mentions how personal it was and how he felt. It meant something very, very important.”

Amara appreciated the fact that she was able hear firsthand what Ijames was thinking and wanting the audience to take from “Fat Ham,” rather than guessing the meaning herself. She also added that she has written a few one-act plays herself and hearing the process helped her too. One aspect Amara latched onto was how Ijames was able to pull from modern day references.

“He talked about the pandemic…and how he connected all of those experiences to his writing,” Amara said. “None of us knew this beforehand.”

Ijames is able to explore social problems, violence against Black men, and the queer identity all within one play. While Ijames’ play is comedy, he is still able to pull from Shakepeare’s original tragedy genre with these themes.

“There’s the tragedy of the everyday,” Shaw said. “It’s also the fact that Hamlet is a queer, Black person in this version and the relationship that queer, Black people might have with their parents. That has an interesting and important centerpiece.”

Amara said that Ijames made parts in the original play that were not as prominent or “effective” more intimate.

“It was very, very strongly dialogue-based and just way more impactful than it was in the original,” Amara said.