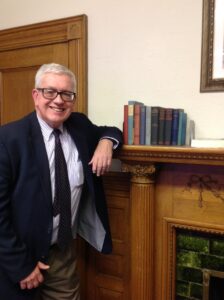 Timothy Connolly teaches news writing at Clark University. The position truly encompasses his career for the past forty plus years.

“I learned how to read before going to school by reading newspapers at home,” Connolly said. “My family was a newspaper reading family.”

His family received the Pittsville Union each morning and the Berkshire Eagle each night. Connolly would read both papers throughout most of his life.

Connolly began as a reporter while still in high school at St. Joe. Connolly referred to himself as a “jock” in high school. He had a sports column for the school paper.

As a junior, one of his professors told him that the Berkshire Eagle was looking for someone to cover the district court on Saturday mornings. This same professor was the first person who told him he was a good writer, he said.

“It was good. It was also kind of crazy sometimes,” Connolly said. “Public drinking was still a crime and sometimes my friends would be on the dock.”

For two years, Connolly covered the court cases for The Eagle. Connolly learned that he had to treat everyone equally in his reporting. Articles had to cover the issue accurately and not make any exceptions, even for friends.

“They wouldn’t want their name in the paper but I couldn’t take them out,” Connolly said. “I learned the valuable lesson that you have to be fair to everybody.”

He went on to become an editor, reviewer for restaurants and books, political columnist, and reporter during a 23-year career at daily newspapers.

“I really think politics was my favorite,” Connolly said. “It was more challenging.  You had to interview people who knew how to deal with the media. You weren’t going to get any scoops from people telling you something wrong.”

Connolly had a political column in The Telegram and for nine years. The local news for Connolly was important for the connections.

“I love doing them, just talking to people about their lives, I find interesting,” said Connolly, who also did feature stories on the side.

“I was due to cover the Democratic and Republican Conventions. I kind of figured things were going the wrong way when my boss asked me to get the cheapest transportation,” Connolly said. “She told me they weren’t going to send me.”

Though, Connolly didn’t like that more than being a reporter.

“It was fun, but I had to learn a lot of stuff about taxes,” Connolly said. “The Massachusetts Department of Revenue was trying to get people to file their taxes online at the time.”

Connolly did this through getting the Commissioner of Revenue to do articles with reporters. He worked with reporters each day still, but from the opposite side, per say.

Wanting to find something closer to home, since 2007, Connolly has been the spokesman for the Worcester County District Attorney.

“Both the DOR job and this job, I think my main benefit to my bosses is I think like a reporter,” Connolly said.

Connolly preps the district attorney with questions that he believes reporters would ask prior to interviews. He also writes press releases, speeches, and things like that.

As of October 22, 2021 Connolly will be retired from his position at the DA. He said that the timing seemed right after he recognized the spryness needed to wake up in the middle of the night sometimes for press conferences.

“Getting on the inside of prosecutions and just law enforcement in general, I think that gives you a different perspective when you’re working from the outside in,” Connolly said. “I think I would have some good advice for journalism students who might be leaning toward getting into that sort of reporting.”

And Connolly has some advice for retirement that he heard from a friend: “Let the game come to you.”

“Too many times you run around trying to find something new or do something but if you do something, but if you sit back for a while and relax, you’ll figure out what you really want to do,” Connolly said. “People might approach you.”

Interestingly, Connolly has worked at the district attorney office with many of his previous students.

“I’ve had several assistant district attorneys that were former students of mine,” Connolly said.

However, Connolly will continue his teaching gig.

“I’m not sure anything will change,” Connolly said. “I will be available for more interaction with students.”

Since 1985, Connolly has taught news writing. He started at Assumption University, where he taught for 20 years.

“I still teach how to ask questions and get interviews and go about things like that,” Connolly said. “But I really teach now how to write stories.”

One topic that the students always cover is a city council meeting.

“One issue is they don’t always have the local paper to compare their notes to,” said Connolly, adding that the meetings are not always covered but when they are it is a day or so late to be published.

Connolly thinks everyone should take his class.

“I think people who are going into journalism should take it but I think it has a value for people not going into newspapers just because it’s a direct style,” Connolly said. “I can’t tell you the number of students who have come into the class with these grandiose sentences and then by the end of the semester they become pretty tight.”

Connolly said he enjoys the mindset his students bring to the class, calling them smarter than himself sometimes.

“They impart a lot of their knowledge from the class into a lot of other things,” Connolly said. “I like to have classes from all areas…students that aren’t necessarily journalism students weighing into the topics.”

Connolly’s most interesting and memorable story by a student? The economics of stripping.

“She wrote a great story. One of the best stories that I ever got from a student,” Connolly said. “She became an assistant district attorney, and now she’s a clerk in Leominster.”

Connolly’s News Writing class is offered in the fall on Monday nights at 6 p.m.