With his retirement close on the horizon, Monica Sager interviews Professor Jay Elliot about his life, career, and future plans.

James Elliott came to Clark University in the fall of 1971. He was hired to teach American literature in the English Department. At the time, James Beard, another professor who Elliott called his mentor, was working on the writings of James Fenimore Cooper and needed a textual editor.

Right out of Indiana University graduate school, Elliott was the man for the job, “despite the fact that I was rather young, green,” he recalled. 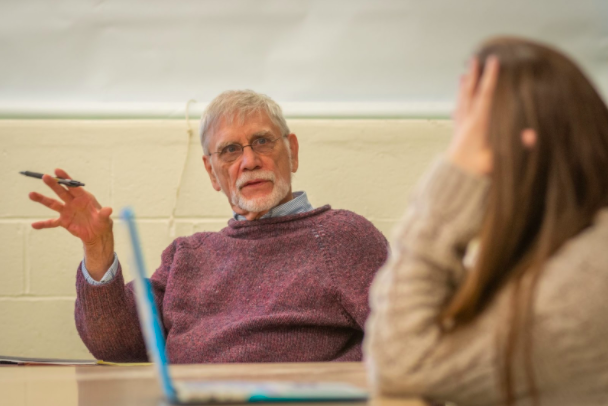 Elliott’s first day at Clark though may not have been what many of his current students may expect out of the knowledgeable, clearly spoken, gentle professor.

“I was teaching the first semester of Major American Writers…and I had the reading list all set out. I had more notes all prepared. And I walked over to Jonas Clark,” Elliott said. “Then, at the precise time, I looked up, and there were 40 or 45 looking ‘Who’s the new kid on the block?’ I froze. I couldn’t speak. Nothing would come out until I finally said ‘Okay. You all have your syllabuses. I hear from my chair that we don’t need to meet full time on the first day. So I’ll see you Thursday.’ And I packed everything up.”

“It’s been a while,” Elliott said. “The classes went better and were more free reading and extemporaneous with discussion.”

But now, after 50 years with the Clark community, Elliott is retiring.

Through Zoom classes over the past year, Elliott has had to revamp his format, working harder to generate discussions. 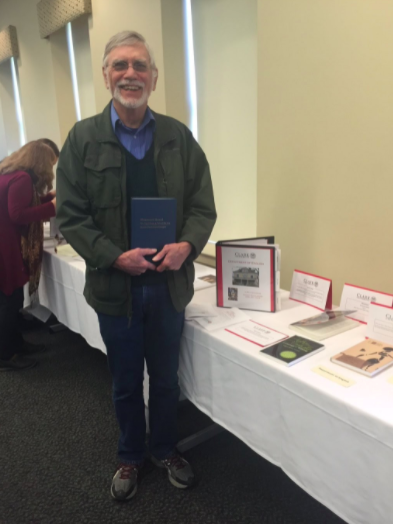 “I find myself having to talk too much,” Elliott said. “I miss the personal contact with colleagues and students and so forth.”’

“Jay Elliott has been a key figure in Clark’s English Department — a much-loved and engaging teacher, an influential editor of James Fenimore Cooper’s oeuvre, and a helpful citizen of the Department and University,” Kasmer said. “I honestly can’t imagine the Department without him.”

“He was sort of like the grandpa of the department. We liked going to class, seeing his sweaters,” said Nick Porcella ’15, Elliott’s former advisee and student. “He strikes me in a lot of ways as the prototypical Clark professor. He treated everyone the same. It didn’t matter if you were a first year bio student or a senior English student. He’s just adored.”

“What I’m going to miss most about Professor Elliott is his kindheartedness,” said Pellegrino, who is also one of Elliott’s current advisees. “I feel like it’s rare that you find a professor who so genuinely cares about his students as much as Professor Elliott does.”

Elliott said that is what he’ll miss most about Clark — coming in and seeing people.

Elliott, who served as the English Department Chair for six years, has taught many course options at Clark throughout his five decades with the school, from Introduction to Literature and The Short Story to seminars in American realism and naturalism.

“Working with Professor Elliott on my Capstone was the best thing I could’ve asked for ” Pellegrino said. “It was so helpful to have someone like Elliott encouraging me throughout the entirety of the course.”

“Until 2016, I was a certified baseball umpire. I got into that when my son was starting to play Little League,” he said. “It got me into reading about baseball, and I’d always been curious about baseball novels anyway.” 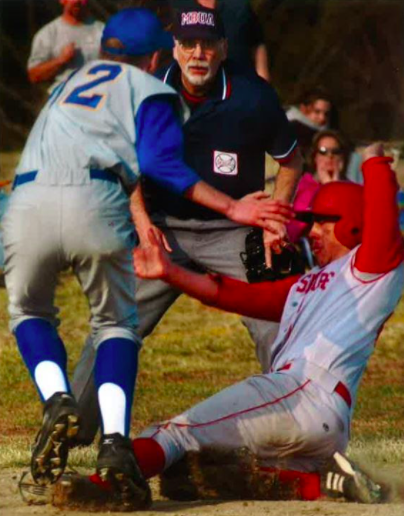 Elliott is a Red Sox fan, even though he grew up in Northern California. After his first year of graduate school, Elliott moved to Boston for the summer, where he worked as a waiter at the Sheraton Commander. It was the summer of 1967, when the Red Sox made it to the World Series. Elliott and his friend would take the T to Fenway on the weekend, paying less than $10 for a ticket. And he was hooked.

Students involved with the course were able to experience Elliott’s passion for the game as well.

“The course provided an incredibly interesting framework for understanding American history,” said senior Aidan McLaughlin. “Perhaps more than anyone, I would say Professor Elliott helped me, a history major, understand how to read and interpret literary sources in an academically appropriate way…I doubt I would have the language to interpret (literature) in context without the comments from Professor Elliott on our weekly writing prompts and essays.”

Pellegrino also added that she originally connected with Professor Elliott for their common love for sports.

“I think that immediate connection brought us together and has allowed me to hone in on sports-related subjects in my major,” Pellegrino said. “Having Professor Elliott encourage me, but also understand exactly what I wanted to do as it related to sports journalism, has been extremely helpful and influential.”

It wasn’t until the mid-80s that Elliott began teaching theory, what he is most known for today.

“We discovered as a department that many of our seniors and even Master’s students who are going on to further degrees were entering programs which assumed a certain acquaintance with literature theory,” Elliott said. “The theory is much more incorporated into the curriculum now than it was in the 80s.”

Elliott found a love with the theory of literature. He taught a course called Literature of the 60s as well as others like Contemporary Literature Theory, where he takes his students through multiple lenses of writing and discusses it within grammar structures and popular texts.

“I just remember being very supported,” Porcella said. “I think it’s ultimately what made me love the English Department. It made me feel at home.”

Elliott wasn’t always interested in going into the English field though.

“I was really interested in high school in physics, nuclear physics,” Elliott said, adding that one of the reasons he went to Stanford University was because the Stanford Linear Accelerator was just completed. “While I was there my interest just totally shifted.”

Elliott took a few creative writing courses and ended up majoring in English. 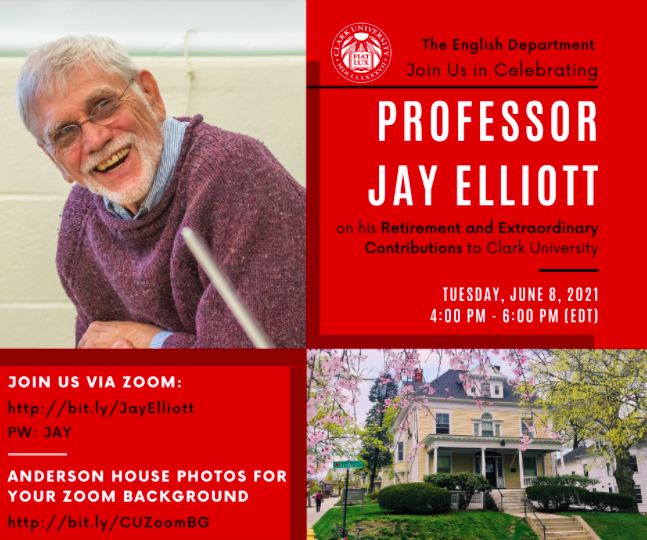 During retirement, Elliott plans to continue with his love of English by researching and writing on a few projects, as well as continuing his textual editing of Cooper.

“I’ve got a number of projects. I’ll still be working with the Cooper edition. We’ll be doing the textual editing,” Elliott said. “The other thing I am interested in is ancestry genealogy, research and experience.”

The English Department will be hosting a party for Elliott June 8 from 4-6 p.m. to honor his retirement and contributions to the Clark community. The event will be held over Zoom.