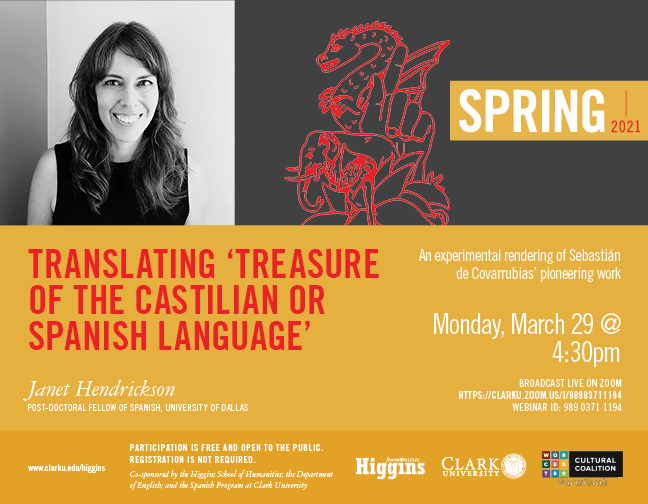 When a piece of writing strays beyond the conventional tropes of those of classic literature and becomes a hybrid of creativity and preservation, then readers are drawn in through an amalgamation of intrigue and curiosity and have no choice but to consume the work in one sitting. This was the case for me when I was lucky enough to be introduced by my English 208 class to Janet Hendrickson’s translation and compilation of “Treasure of the Castilian or Spanish Language” from 17th century writer and lexicographer Sebastián de Covarrubias. This piece surpasses the mere title of poetry or transliteration work and instead wanders into its own genre of erasure and composition.

Hendrickson, a translator and a pioneer of prose, graced Clark University with a visit on March 29th and March 30th of this year. She received her MFA in Nonfiction Writing from the University of Iowa and a PhD from Cornell University in Romance Studies. Her background in literature only enhances her present focuses which are Latin American literature, translations, and poetry- that of which she studies as well as translates. This is where she encountered “Treasury of the Castilian or Spanish Language” which was originally written by Covarrubias in the 1500s and was an ongoing project until it was published in 1611. With over a thousand pages, Covarrubias relied on the dictionary as a place for processing the events and commodities of everyday life, along with deeper ponderings upon matters more foreign to a 17th century Spaniard- such as elephants. “Abeja (bee)”, “faldas (skirts)”, and “unicornio (unicorn)” are some examples of terms that make an appearance in the contemporary version which Hendrickson tackled head-on, thousand pages and all. Many post-it notes and revisions later, we were blessed with the final product. Not solely a translation, not quite a book of poetry either – but a creation of prose erasure. I was entranced.

During her first public visit to Clark via Zoom meeting (cohosted, respectively, by the Higgins School of Humanities, English Department, and Spanish Department), Hendrickson spoke more about her process with the dictionary, such as how she reduced the first section from its 200 page origin to five pages. The letter “A” — the very first entry, and my favorite one — faced some artful minimization as well so that it remains as:

It is so simple to pronounce. It is the first letter man utters on being born. It is pronounced, like the vowels that follow it, by puckering the lips and exhaling. The simplicity of the a is such that its utterance is not denied to the mute, who with the a and the help of their tone, the movement of their hands, feet, eyes, and body make us understand in a moment what the articulate could not; the mute, as they walk together, prattle more than magpies. The a is doctrine, way, eternal bliss. The a, repeated three times, declares the mute’s impotence in speech; for me, mute in what I seek, it means the Father, Son, and Holy Ghost; I implore my God to give me His life to finish this work for His glory and for everyone’s use. I know of no one who has taken on this task, bringing it to the end I seek. A they called the letter of health.

Hendrickson graciously read us the entirety of the “A” words’ section before answering our questions. Some students pondered more about her process, and others suggested more entries to be read aloud. Although in seminar format on Zoom, it was great to hear the questions as they arose, for I found myself to be wondering a lot of the same things.

Luckily, any unanswered wonderings that may have remained did not have to wait too long, for Hendrickson made a presence in my English class “Writing the Borderlands” taught by Professor Mandy Gutmann-Gonzalez. I was especially grateful for this visit because it was here that we learned more about Hendrickson’s personal philosophies when it came to her translation process. To Hendrickson, “translation [is a] border space, a refuge space”, and since the “translator is always involved” , who we are as people and how we care for the texts is inevitably an influential factor of the work we produce. Most interestingly, Hendrickson equated translation to a “seam”, as an “injury of separation between languages”. We are meant to care for that space and tend to it. Collective authorship is an intimate process, the former being methods that Hendrickson clearly prioritized in her rejuvenation of Covarrubias’s dictionary. Frantically, I jotted these quotes down, succumbing to the fervor of being in the presence of great wisdom. We as students were amidst a translation project ourselves, so I took with me these words of advice.

At one point during her talk in our class, she was in the middle of speaking about her strategies when suddenly she whirled around in her chair and rushed to the lush bookshelf in her background and exclaimed “I have it here, actually!” She sifted through the books and drew out one with a red cover: The Synonym Finder by J. I. Rodale ended up being a book she strongly recommended for us to keep in our bookshelves. It is a lengthy text of synonyms that provided her great assistance with her writing.

Towards the end of Hendrickson’s visit, Professor Gutmann-Gonzalez gave us a space to talk about our upcoming translation projects. I, as a Spanish major, had a lingering question that I did not have a chance to ask at the previous visit and so I jumped on this opportunity: “How long did it take you until you felt confident enough in your Spanish abilities to tackle (and successfully conquer) such an ambitious project?” She laughed at this and noted that one may never feel confident enough in their mastery of a language. Sheepishly, I agreed. As a student of the language for many years, I still would not consider myself fluent- and she felt the same in spite of this successful work of transformational literary art! Her suggestion was to enjoy oneself and do our best in the translation because in the end, it is a way of reading and a way of learning.

When we concluded our time with her, I am sure I can speak on behalf of my classmates when I say we left feeling inspired and motivated to go forth with our translation assignment. Not only is Hendrickson a creative thinker, but she is also well-spoken and a vibrant speaker. Passionate, energetic and funny; we were all engaged in our conversations with her and eager to hear her thoughts. It was a great opportunity to both hear her work out loud and learn more about what it took to complete such a unique project that is Hendrickson’s translation of “Treasure of the Castilian or Spanish Language”.

I would like to thank Clark’s Higgins School of Humanities, the English and Spanish Departments, my English professor Mandy Gutmann-Gonzalez, as well as Janet Hendrickson herself. It was kind of her to give us her time, and a well-organized event from the departments. No longer is the process of translation a task, but instead an unequaled exploratory voyage through the revelations of language proximity and meaning-making.