Monica Sager reflects and reports on the Winston Napier Conference, which was held to honor and celebrate the 20th anniversary of Napier’s foundational “African American Literary Theory.”

Winston Napier lived “expansively, graciously, and generously,” according to SunHee Gertz, Professor Emerita of English. Napier was born in Jamaica, before migrating to the United States. He taught at Howard University, Purdue University, George Washington University, and Bates College prior to joining Clark’s faculty in 1995. He studied race, social justice, and how theory played into the field, working to change the way people interacted with art and thought of representation.

The Winston Napier Conference: Then and Now was held October 23 to 25 to honor and celebrate the 20th anniversary of Napier’s foundational “African American Literary Theory.” It was the first volume to document central texts and arguments in race theory from the 1920s to present day. Kourtney Senquiz, a Visiting Assistant Professor of English at Clark University, convened the conference. 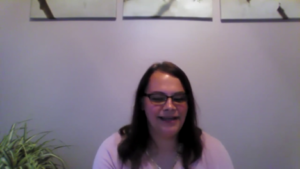 The late E. Franklin Frazier Chair and Associate Professor of English at Clark was memorialized by professors, colleagues, and peers at the Conference. Napier was remembered for his work within social justice and Critical Race Theory.

Napier was also known for the organization of a speaking series, the African American Intellectual Culture Series, around the topic, given by many influential people, including Peniel Joseph, who spoke at the conference as well.

“When I think of Professor Napier and his memory, he was so encouraging and kind and thoughtful,” Joseph said. “I felt a special kinship with him. He was a real mentor…In addition to being this truly important scholar he was really this great teacher and administrator and someone that cared about pedagogy.”

Through his series, Napier highlighted “a phenomenal cultural happening in society,” as he said in a September 2007 talk.

“I wished to establish and promote the work of all scholars addressing the history, the evolution, and the many dimensions of African American performance and output,” Napier said in the talk, which is recorded on C-Span. “We have served the critical and progressive spirit that regulates America’s advancement of social tolerance and equality.” 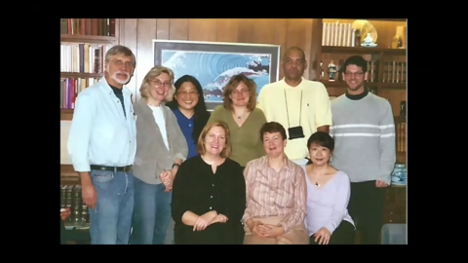 Ginger Vaughan, Professor Emerita and Research Professor who was also the Chair of Clark’s English Department when Napier was a member of the English Department, said that Napier did just that, including students and professional intellectuals alike into critical discussions about race, culture, and social justice.

“When he founded with Mike Springler the African American Intellectual Culture Series, he would always arrange for a small intimate dinner,” said Vaughan. “Every single time, he made the effort to find two or three students and bring them to that dinner where they were treated equally with everybody there, where they were invited to engage in discourse with these very dignified, well known scholars. For Winston, the brain is a level playing field.”

The Conference, which was held via Zoom, started with introductions and memories of former students, colleagues, and friends.

“I only knew him for a short time, but I think from him I gained a better sense of what it means to be a scholar,” said Lisa Kasmer, Clark’s Associate Professor and Chair of the English Department.

Napier’s work and theory continue to make an impact within not only the English Department at Clark but also the understanding of African American literary culture and theory  in general, as exhibited by many of his peers throughout the conference.

“Winston Napier lives on through language, your scholarship, and through our memories,” Senquiz said. “He was with us then and he is with us now.”

Nicole Young led a poetry performance to honor Napier. James Smethurst, who was Napier’s former colleague, led a roundtable discussion with Kristina Wilson, a Clark Art History Professor, on the evolution of Black art. The conversation, which spurred from a question Napier asked at one of his conferences, span topics of stereotypes, homophobia, and specifics within drawing and writing.

“I’m hoping that I can channel the spirit of Winston Napier because Winston Napier amongst the many other things…was one of these really clever, erudite people in my experience who didn’t suck all the air out of the room but actually made everyone in the room with him feel smarter,” Smethurst said. “I think that might be why he was such a good teacher.”

The second day of the conference featured a keynote address by Peniel Joseph, who is a Professor at the University of Texas at Austin’s Lyndon B. Johnson School of Public Affairs. Joseph’s speech grew from Napier’s own contributions to the field. 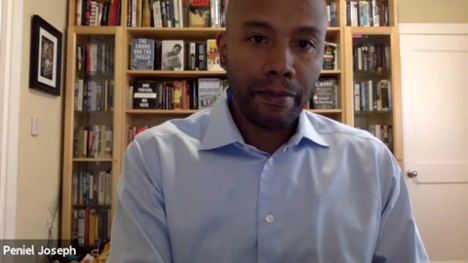 “I’ve always been interested in the Black power movement,” Joseph said. “We have to think about it in this panoramic way. It was local, national, global in scope. It was ideological. It was political. It transformed policy. It connected to religion.”

The final day of the conference concluded with a conversation about the Genius Children concert series, which was moderated by Benjamin Korstvedt, Professor and Chair of the Department of Visual and Performing Arts at Clark. Korstvedt’s discussion with Ariana Falk, the Music Director of the MA Fulbright Association, and Cailin Marcel Manson, Director of the Music Performance concentration at Clark, represented the future-looking aspect of the three-day gathering. 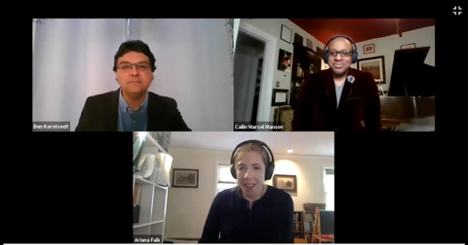 “There’s really an empowerment that’s happening now almost internationally to really make sure that these voices, the voices of the darker brother that Langston Hughes talks about, are heard more fully and given their due say,” Marcel Manson said. “Being a Black classical musician in a predominately white field…it’s one of those things you’re dealing with constantly in different layers.”

The exploration of the different aspects of the intersectionality of race, knowledge, freedom of expression, and art throughout the conference truly tied back to Napier’s message, according to Senquiz.

“The spirit and measure of his work lives on when courses still use his African American literary theory text to introduce new scholars to the theory behind African American intellectual thought and culture,” Senquiz said. “With every conversation that we have that moves the progressive scholarship within the field, we can rest assure that Professor Napier will be thrilled that we are here today to not just honor him but to continue the scholarly conversations and explore the possibilities that his–and now our–pioneering scholarship has toward the advancement of social tolerance, equity, and anti-racism.”

The Conference was co-sponsored by the Higgins School of Humanities; the Office of the Provost, the Department of English; the Department of Visual and Performing Arts; and the Center for Gender, Race, and Area Studies. 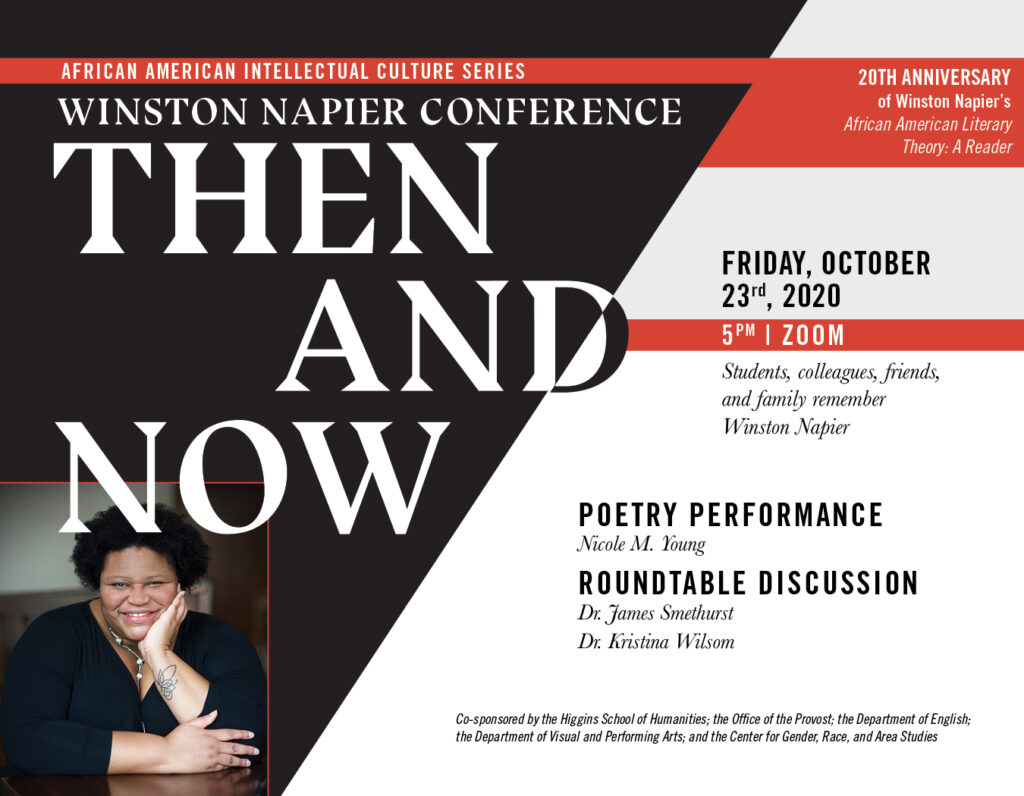 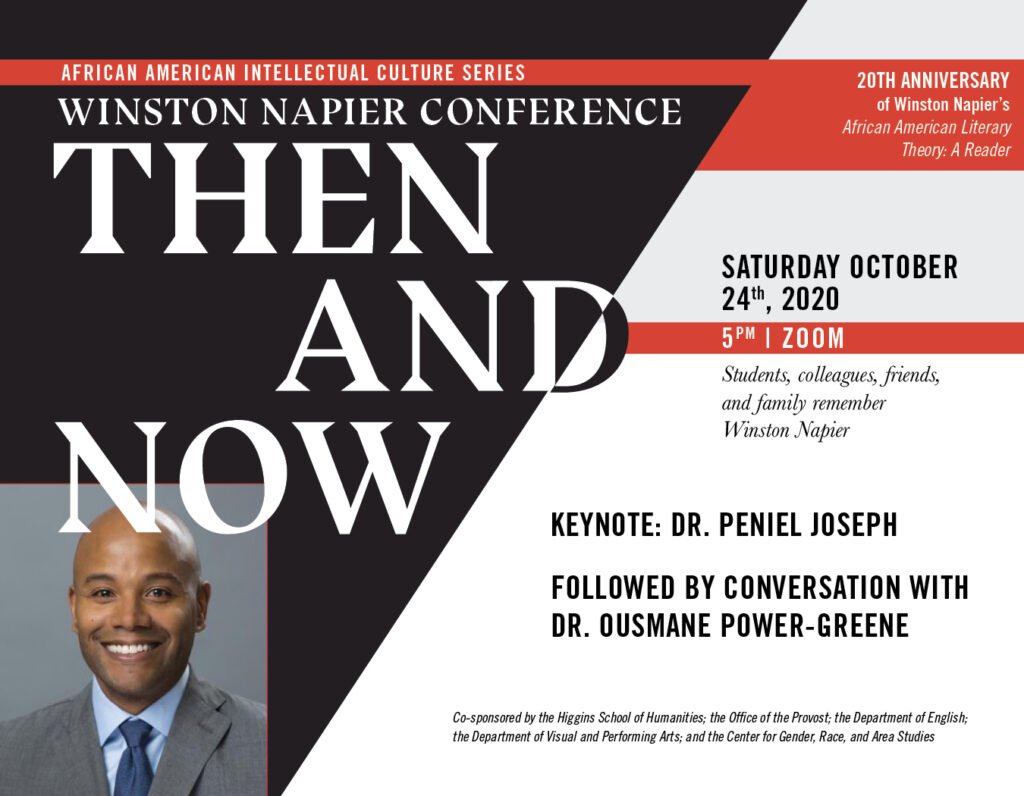 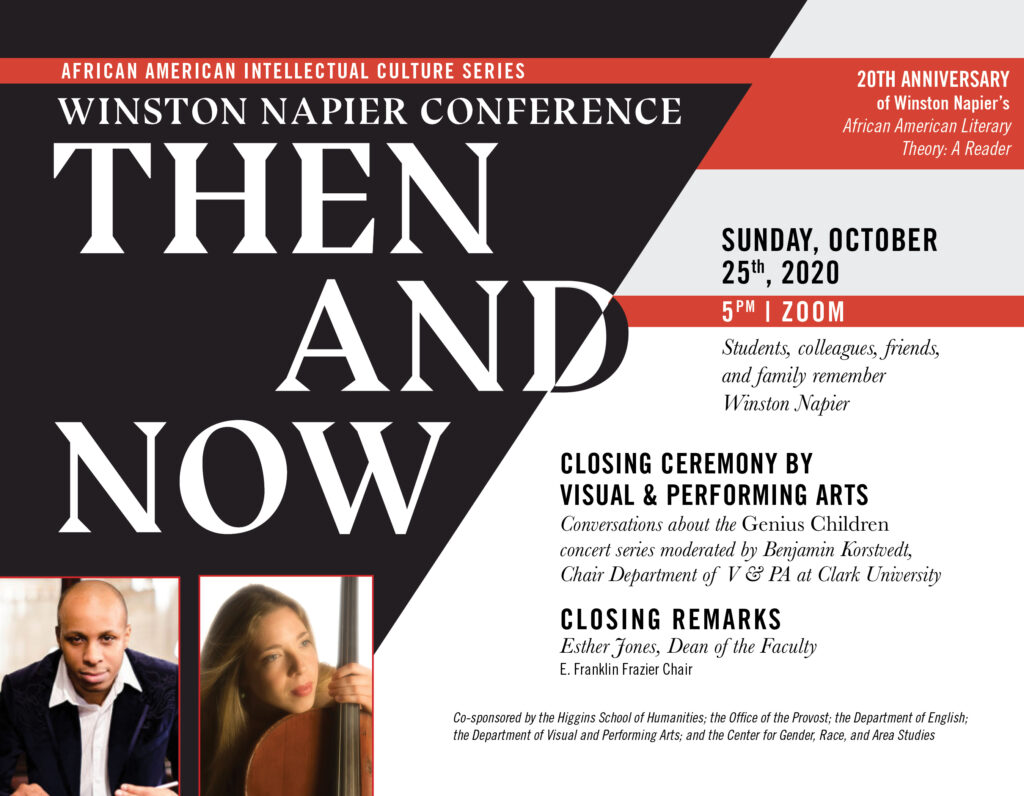