It’s gray and raining on a Monday as students slowly file into Michael Carolan’s Creative Writing Nonfiction class. They are a reserved group of eight, but present nonetheless. The room hums with anticipation. When I took Carolan’s class back in 2016 we explored nonfiction through an individualized lens. Texts such as Virginia Woolf’s “Death of a Moth”, Louise Erdrich’s “The Leap”, Joan Didion and Jamie Hawkesworth’s “On Keeping a Notebook” all emphasized the personal pursuits of a writer. Now, the course has moved in a different direction. This Spring, the class is attending council meetings, workshopping, and r

eading nonfiction texts that pertain to the environment. I skim the reading list that Carolan has emailed me prior to observing the class: “We Are All Apocalyptic Now”, “Learning to Die in the Anthropocene”, “The Sixth Extinction”. It becomes clear to me that the new year on campus brings with it the unavoidable reality of our world. Manifested in the classrooms, the syllabi, the beating sun in mid-January.

Carolan’s course is one of several on campus that are part of the New Earth Conversation (NEC) and the Council on the Uncertain Human Future (CUHF). The intention of these committees is to “acknowledge and see into the climate and ecological breakdown underway, and the socio-political context through which it arose.” Throughout the course, students are expected to attend two council meetings and produce four short pieces of narrative through guided workshops. The council strongly encourages student feedback to enhance their critical eye and develop autonomy in their work. Carolan hopes the course will help inspire students who are interested in storytelling, as well as lend “experience in real-world research and expository and persuasive writing on environmental subjects at the professional level.” I’m reminded of his teaching style when he tells his students, “If you’re working to your full potential I’ll know it and you’ll know it. Everything is a first draft until it is in print or until it is seen by someone else.”

When I arrive to the class on Monday, students begin to debrief on the council meetings from the past two weeks. Many of them agree that the council set a good foundation for the semester and built a sense of community. “I learned how to be comfortable with the uncomfortable”, one student says. “People were saying things as they wanted to say them, without fear. It felt like a safe space.” Another student remarks, “It was a new and different experience for me. I’ve never been forced to share the genuine thoughts I have. Everyone spoke from the heart and engaged meaningfully.” Carolan agrees that it felt powerful, “no one was asking, what do you mean?” Some students, though, have conflicting feelings. One being that “the idea of the council is outdated”, focusing primarily on “nostalgia.” Another student says, “you can’t go back to this imaginary Eden where everything is perfect.” Others argue that it felt repetitive in nature, that they had more questions coming out of the council than they did coming in. “How is this really useful for what I’m doing?” One student asks. Carolan chimes in on the experience saying, “It is something we can write about and move through…as time went on I started feeling clearer. Grounded.” In the class of eight, it becomes clear that the students can feel the impending weight of the world on their shoulders. A world they are expected to carry. 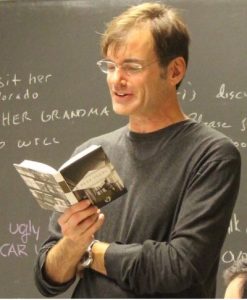 The class moves into a discussion of the text “Come Heat and High Water” by Mario Alejandro Ariza, a memoir which strings together trauma healing and climate change. Carolan refers to the “nut graph” of a story while discussing the synthesis of the authors ideas. “His trauma is overwhelming, there seems to be no way out. But he gets to a bigger truth.” What makes this piece stand out, Carolan explains, is “the energy behind it. The initiative. The biting voice.” With any piece of writing, the reader wants to feel “taken care of.” Carolan compares nonfiction to “a puzzle”, “a presentation”, which must be “enticing, enforcing, and emotional” all at once. The class moves through a collection of poems and prose excerpts. One student says the pieces echo “humanity as a collective” which has “left behind nature.” Another student says they remind her of Daoism: “Everyone has to strive to meet the values of nature.” Each piece has hidden a promise to the world, but each a promise that has begun to dissipate. Through the years, time is less and less on our side. Our debts to nature and its beauty nearly overdue.

Part of the course explores a real-world project spearheaded by Carolan that received a Higgins Mini Grant. Carolan notes: “One of the country’s largest environmental disasters of the 1980s occurred outside of Kansas City,” where Carolan was born and raised. “Millions of pounds of a toxic industrial hazardous waste were abandoned. But the small rural town still suffers with high rates of illness and questions remain whether the site has been cleaned.” Students engage with telling the town’s narratives on multiple levels including health, government, and media.

Later this semester, Carolan’s class will visit the River Bend Farm at the Blackstone River Canal Heritage State Park, where they will hike the Goat Hill Trail and explore intersections of industry, nature and climate change. The Class also will participate in writing and sharing for Listening in Nature on April 15, a ca 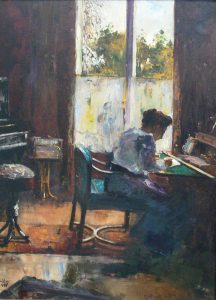 mpus-wide event that “conveys our sense that practices of slowing down, listening, becoming observant and available, and awakening to the magic of living ecosystems is vitally important as we navigate the realities of a warming world.”

The Special Topics course will become a regular offering in Fall 2020 as English 2XX: Imagining Place: Writing Health, Science and the Environment, and will continue to engage with the climate crisis we are up against.

As students to write in reflection to their environment, an exchange between the writer and the world takes place, strengthening critical thinking, introspection, and action.

Of course, those who feel deeply; the poet, the researcher, the romantic, to name a few, wake up in this world and listen to what it has to say. Listen until they are ready to respond.