Olivia Simonds writes on the importance of English Majors in our modern global economy.

It could be argued that in English majors’ down-time—from literary essays, critical readings and textual analysis—they are often met with the moral dilemma of where such studies will take them, perhaps instigated by their fellow STEM majors, a prying but caring parent, or a relative around the Thanksgiving dinner table. Humanities studies, at large, are not represented as money-making arenas in our society. The characterization that takes place within our labor market represents two main archetypes: the overwrought Wall Street Banker and the reclusive Romantic poet. This becomes a challenge to see if, in fact, “the creative” person can be proven worthy of financial success.

David Deming challenges this conventional outlook in his New York Times article: “In the Salary Race, Engineers Sprint but English Majors Endure”, where he argues that the skills learned by an English major foster a particular adaptability and tolerance in the professional world. A liberal arts education has high value, Deming argues, since “it builds a set of foundational capacities that will serve students well in a rapidly changing job market.” On the other hand, the skillset of a STEM major is more short-term. Deming notes: “Between the ages of 25 and 40, the sha 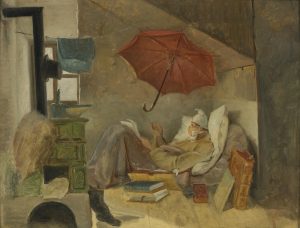 re of STEM majors working in STEM jobs falls from 65 percent to 48 percent. Many of them shift into managerial positions, which pay well but do not always require specialized skills.” Likewise, as modern technology evolves, the STEM major may fall short in the workplace. “STEM jobs change rapidly,” Deming notes, “and workers must constantly learn new skills to keep up.”

Of course, salary disparities remain a prominent component of our social perceptions of success. However, Deming finds that the wage gap between a STEM and English major significantly decreases as they get older. Among women, “STEM majors earned nearly 50 percent more than social science and history majors at ages 23 to 25, but only 10 percent more by ages 38 to 40.” The English major brings emotional expertise to the table by effectively exercising what Deming refers to as “soft skills”, problem-solving, team work, and written and verbal communication. Such expertise surpasses one’s ability to code and calculate, instead offering “long-run value in a wide variety of careers.”

Deming clarifies that he is not trying to dissuade the STEM major, but rather the systematic impulse “to make college curriculums ever more technical and career focused.” Shifting the labor markets conventional dichotomy of the STEM major vs. Humanities major will help broaden society’s perception of financial success. And perhaps most importantly, an English majors ability to utilize soft skills can help ease the steady current of our globalized world.