In AY 19-20, Kourtney Senquiz will be a Visiting Assistant Professor in English at Clark University. In S’19, she is teaching African American Literature II and Radicalism and the Black Arts Movement. 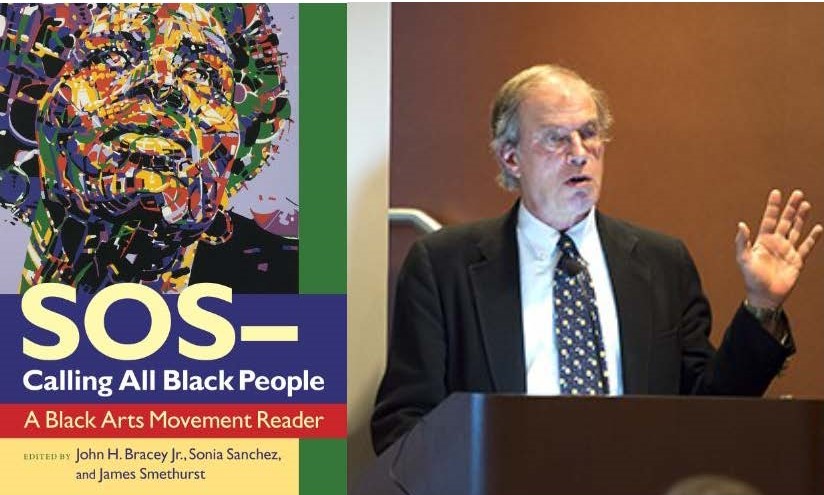 Professor James Smethurst taught me everything I know about the Black Arts Movement. As soon as I knew I would be teaching Radicalism and The Black Arts Movement, I sent him an email. With uncontained enthusiasm, I told him that we would be using the anthology, SOS- Calling All Black People, that he edited with John H. Bracey and Sonia Sanchez. Without any hesitation, he offered to come to the class as a guest lecturer. Anticipating Professor Smethurst’s enlightening lecture, I decided to open up the event to my students in African American Literature II as well.
Although Smethurst has a busy schedule and is working on several projects while simultaneously serving as a professor and Graduate Program Director at UMass Amherst in the W.E.B. Du Bois Department of Afro-American Studies, he was excited to return to Clark and discuss the Black Arts Movement; a subject that he has studied for decades. The last time Smethurst was at Clark was to deliver a speech celebrating the life and work of Winston Napier. Winston Napier was an Associate Professor and E. Franklin Frazier chair at Clark. It was at Napier’s request that Professor Smethurst last spoke about the Black Arts Movement as part of the African American Intellectual Culture Series. I was honored to hear about Smethurst’s prior experiences at Clark and to continue a tradition that Professor Napier started many years ago.
On the morning of March 11th, in a room full of both graduate and undergraduate students, Professor Smethurst did not disappoint. His talk started with a review of the ideologies that informed the Black Arts Movement (BAM). By discussing how Black Power, Bohemia, and Maoism worked together to create the movement, he explained how it spread throughout the nation with the help of local grassroots organizing. Although the Black Arts Movement was not regulated to one specific location, it became well known for providing a unifying national momentum by connecting various black communities and supporting the BAM artists of the region. By breaking down the movement into specific areas, Smethurst illustrated the similarities and differences of the diverse pop-up BAM communities. Utilizing familiar concepts such as The Living Theatre, Theater of Cruelty, and the Theater of the Absurd, BAM artists tried to wake up communities with their artistic talents. Unfortunately, we still have some waking up to do.
Professor Smethurst’s explanation helped students understand that it was the revolutionary radicalism of the movement that helped reconfigure conceptions of Black art. His lecture encouraged a lively discussion and inspired numerous questions. In typical Smethurstian fashion, he happily elaborated on various topics and even provided connections to hip hop and rap of today by showing a clip from Lil’ Wayne’s “God Bless Amerika.” We are grateful for Professor Smethurst’s lecture and hope that he will return to discuss the Black Arts Movement again in the future.

A Year Later and a Spring in our Step