Being an English major, I’ve always thought that even if I can’t always say what I mean, I can write it. But what happens when you communicate with someone who communicates differently? 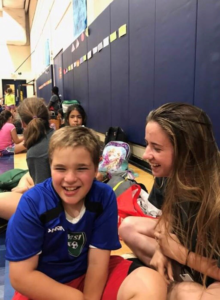 In the summer of 2017, I worked at a Jewish Community Center camp with ten-year-old kids. I applied to the job on a whim having nothing to do the summer before my first year of college and needing money. I had never worked with kids before, give or take a couple random babysitting gigs in high school. I was an Inclusion Counselor, meaning I was assigned one child with special needs — in this case, a 10-year-old boy named Lucas with autism. I didn’t apply to be an Inclusion Counselor – the “inclusion” part was given to me because the camp needed more of these counselors. My job was to essentially look after Lucas, make sure he was safe and cared for, and work on socializing him with the other, ‘neuro-typical’ kids. And I had to write a letter to be sent home to Lucas’s parents at the end of each day detailing Lucas’s progress.

On Meet-Your-Counselor day, the first thing I said to him was: “How are you?” ‘How are you?’ That question bores adults. Lucas didn’t answer, but smiled — a huge, toothy grin with squinty eyes. He is pudgy, with blond hair and blue eyes with the longest eyelashes I’ve ever seen.

My stepbrother can make conversation with anyone, from a stranger in the laundromat to Elizabeth Warren in a New England diner. But I’ve never been like that. I’m not naturally a people person. I had never worked with kids before, give or take high school babysitting gigs, much less kids with autism. The only training under my belt was a two-hour session on “Working With Kids With Special Needs.” By the end of the first day, I felt like Lucas and I spoke two different languages. I was filled with statistics from my Google crusade the night before, such as 25% of kids with autism are nonverbal and few studies have measured autism language development over time. That first day, Lucas accidentally walked into a pole and I was doing my best to convince myself that it wasn’t my fault.

The second day was a little better, but not easier. During the time of the camp day devoted to cooking at the elementary school near the JCC, Lucas insisted he needed to go to the bathroom once every five minutes — and then would proceed to lead me on a grand tour of the facilities. There was a shaky line between feeling like I was and wasn’t doing my job: being too submissive versus being too controlling. But after the first week, I began to notice some things about Lucas that made him special:

Lucas is the most polite ten-year-old I’ve ever met. He prefaces every question, comment, and remark with, “‘Scuse me?”
Lucas loves the sound of his own name.
Lucas loves flapping his hands.
Lucas loves kissing inanimate objects (specifically, my water bottle and the paper cups they gave us during snack time).
Lucas LOVES trains, specifically CSX trains. We would play train videos on YouTube on my phone and Lucas would rewind to the part where the conductor waves.
Lucas would ask a LARGE number of questions each day, primarily:
“What’s his name?”
“Is he nice?”
“Is she nice?”
“Is the lady lifeguard nice?” (Lucas always said ‘lady lifeguard’ or ‘man lifeguard.’)

In a world obsessed with intelligence, originality, and ‘success,’ the pure simplicity of the question of, “is ___ nice?” was refreshing.

I thought the job would show me the limitations of language. Instead, I began to realize the strength of language and the power of simplicity. I was taught in creative writing classes in high school, say what you need to say. If you clump too many extra words around the actual point, you end up burying it.

Since Lucas would repeat the same questions over and over (and over), I had to invent creative ways to answer them. I also began to realize all of the nontraditional ways of communicating. Lucas used body language heavily in his communication – specifically his hands. That summer, I had to actually come to terms with the idea that other people express things differently than I do. When I’m very stressed out, I bottle it up and try not to make any snappy remarks. When Lucas is very stressed out, he sometimes yells for five minutes straight.

Lucas was not an easy kid to work with all the time. It was frustrating when he wouldn’t participate in the activities that most of the other kids were doing. It was frustrating when he would run off, scream, or bite my hand for no apparent reason. It was frustrating when he pulled the fire alarm — an activity that bordered on habit. But seeing how he began to trust me based on our little language made it all worth it. And I began to realize that one BIG purpose of communication is trust. When Lucas communicated with me, he entrusted me with a piece of him. Through communicating with others, we learn to trust them. That’s why reading (and writing!) perspectives other than our own is so important. There’s something to be said about experiencing the way a person communicates firsthand, rather than through the slew of jumbled messages and images that tends to characterize modern-day interaction.

A month after I waved bye to Lucas, I started my first year of college. As I went along, meeting new faces every day, I kept in mind the essential set of questions: What’s *insert person here*’s name? Is *person* nice?

Why did so many Clark Employees Major in English?

Less Pomp, More Circumstance: Earning a “Driveway Diploma” in the Midst of Covid-19