Jason Feifer (’02) is the editor in chief of Entrepreneur magazine, podcast host, and coauthor of the new novel Mr. Nice Guy. He lives in Brooklyn. 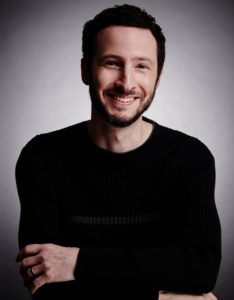 A few weeks ago, I was invited to a dinner with some fellow media podcasters. Audio creators from Gizmodo, Vice, Atlas Obscura, and others were there. And I came with one very pressing question: What are their secrets for attracting new listeners?

When I asked the question, everyone in the room nodded. They wanted to know this too! The consensus: There are no secrets. Everyone’s figuring it out as they go.

Depending on how you look at it, this is either a really exciting or really daunting time to be podcasting. The technology is still pretty crappy. Distribution is a mess. Discoverability is nearly absent. Tons of creators are flooding the space, lured by how damn easy it is to make a show—you literally just record and upload, and now you’re a podcaster. That’s why the truest thing I’ve ever heard someone say about podcasting is this: The barrier to entry is low, so the barrier to success is high.

But for creators who are really committed to it, and who want to explore the medium and challenge themselves, there are so many rewards to be had. Podcast audiences are perhaps the most devoted audiences I’ve ever experienced (and I’ve been working in media since I graduated Clark in 2002). Companies are increasingly willing to experiment with podcast advertising. And listenership across the medium is growing rapidly.

For the past two years, I’ve been making two shows: Pessimists Archive (iTunes, Stitcher, site), a history show that examines why we resist new innovations like the bicycle or novel; and Problem Solvers (iTunes, Spotify, site), a show about entrepreneurs solving unexpected problems in their business, which I make for Entrepreneur magazine, where I’m editor in chief. Each show has its own production system, audiences, and quirks. But each is made with the same ethos—of experimentation, having fun, and commitment to always doing better.

If you’re interested in getting into podcasting here are a few things I think you need to know:

1. Invest in some basic equipment. It’s true, you can make a podcast with literally any audio device. You could use your iPhone if you want. But don’t. Remember the audience: You’re asking people to spend their time on your work, so give them something deserving of their time. Audio equipment is relatively inexpensive, and you can create a good setup for less than $200.

Here’s how I started: I bought a Blue Nessie USB microphone (good quality for the money!), a $9 pop screen (so your P’s and T’s don’t create a popping sound on the mic), and I acquainted myself with GarageBand, the free editing software that comes on any MacBook. To interview people, I downloaded the $40 software Ecamm Call Recorder for Skype, which enables me to record conversations on Skype. With all this, you can create a pretty solid show. The first year’s worth of Pessimists Archive and Problem Solvers were built using this stuff.

I’ve since gotten only mildly fancier, to solve for a few problems I ran into. You can only plug one USB mic into your computer, which means you can’t interview someone in the same room and each be on a mic. To fix that, I bought a Zoom digital recorder ($200), as well as two Samson Q2U microphones ($46 each). I also started using an AI transcription program called Descript, which transcribes audio within minutes for only a few bucks, and also has a lot of really useful features that allow me to edit audio as if it’s a word processor.

I wouldn’t call myself an audio expert, but because I just bought this stuff and started screwing around with it, I learned the basics and now am able to producer higher quality audio. It honestly doesn’t take much time or knowhow. You just have to start doing it.

2. Make something new. Most podcasts are what’s known as “two-ways”—that is, just two people talking. Maybe they’re co-hosts. Maybe it’s one host interviewing a new guest each time. This format is popular because it’s easy; it requires little to no editing, planning, or production. But if that sounds appealing to you, I’d really push you to think deeper about what you want to make and why. You have to respect an audience’s time; they won’t give you their time if you’re not giving them yours. And if you’re lazy, they’re not sticking around.

So what to do?

First, listen to really great podcasts and pay attention to their formats. Check out shows like Reply All, Ear Hustle, Everything Is Alive, The Dream, and Radio Diaries. (And hey, Pessimists Archive and Problem Solvers ain’t too bad either!) Pay attention to how much careful writing and producing goes into these shows. For chatty shows, listen to the Slate Political Gabfest—it may sound like they’re just winging it in there, but they’re actually working off of tons of research and prep per episode, enabling it to sound like they’re having an off-the-cuff conversation when in fact they’re making sure they have an efficient and valuable one.

Now start experimenting yourself! I began Pessimists Archive by just wondering if I could make an episode of the kind of show I envisioned. The first episode, about The Walkman, is the result: It took me three months to make, along with a lot of drafts and rewrites. But in the process, I learned a ton. And I felt far more qualified to make episode two.

Sure, you could just make another two-way. Maybe it’ll be good. But it’s more likely that it’ll get lost in a sea of similar shows. Push yourself to create something that stands out!

Which leads me to…

3. Take on the writing challenge! Writing for a podcast is very different from writing for a newspaper, magazine, or blog. You’re writing to be read aloud—which I know sounds obvious, but it actually does change the way you write a script. My script writing is far more straightforward and casual than my magazine writing. People don’t hold things in their heads the same way audibly as they do when they’re reading with their eyes, so shorter and less complicated sentences are a good start. I think of this as a fun writing challenge, and, in consciously trying on a different writing voice, I’ve definitely improved my non-audio writing.

Also, do this: Go listen to narrative podcasts (i.e., stuff like mine where it isn’t just a two-way), and pay attention to when the hosts are “signposting.”—that is to say, when they’re saying something that helps the listener get oriented to the story. I do it all the time in my shows: I say what’s about to happen, or I recap what we just learned, or I explain that we’re moving from one point to another. That’s signposting, and I learned it by listening. This is how you’ll help the listener stay oriented.

If you follow this advice and make a show, reach out and tell me! I want to hear it.