English Major in a Theatre Camp

The first day of my out-of-the blue summer job as camp manager at the McLaren Park Session of SF Shakespeare Festival Camp, I sat in 2 hours of traffic. Getting over the Bay Bridge is hard at the best of times, but during rush hour it was a nightmare the likes of which I had never experienced. I was on my way to McLaren Park, which was about the farthest end of San Francisco as you could get from my house, and known as one of the most difficult group of campers to teach, let alone manage. And that was what I was doing, for the first time I had worked with a summer camp: managing.

I was about 1.5 hours late and very tired of stop-and-go traffic at the tolls when I realized something rather dire. I had forgotten the keys, the all-important keys to the all-important stage, without which there were functionally no classrooms. I knew exactly where I had left them, unless the dog had moved them somehow. I wanted to cry. I wanted to go home and put the covers over my head. I did not want to do this job for the next two weeks.

When I finally arrived at the camp I met the other teachers, mostly new like me, and the kids, mostly regular campers from the surrounding neighborhood, who had been doing this as long as they could remember. McLaren is different than some of the other sessions of this camp because it is held entirely in an open park. The surrounding neighborhood is generally working class, and all the camp resources are brought from the SF Shakespeare Festival directly, as the site offers only the most basic amenities. After unloading all I could unload and attempting to save face with my coworkers, I was allowed some rest in an unexpected way: a 6-year-old camper had just arrived, and he was so scared of camp so that he had put his hood up and refused to participate.

Class must take place, the show must go on, so as the only unoccupied adult around, I tried my best to make him feel better. He was really apologetic for his behavior, told me I didn’t have to sit with him or anything; he’d just sit there and wait until his mom picked him up (you know, in 6 hours). I tried to distract him, bond with him by, talking about bugs and Star Wars, but he still wouldn’t budge.

Geez, me too kid. Me too. What exactly were either of us doing here?

I had been desperate for an internship. When I left school all my “probably’s” had become “another candidate’s” and at home in Oakland I was competing with thousands of university students for the same low-paying jobs. When I heard “Shakespeare” mixed with “internship,” I really didn’t care what type of work it was; it was vaguely related to my interests and fulfilled a “connecting with youth” requirement for the MAT program.

The interning portion of this position had a sharp learning curve, but it was doable. I was working with 11-16 year olds and experienced teachers. The most nerve-wracking part was making sure we had the same amount of campers at the end of the day as the beginning.

I had some really good conversations with the teachers and managers, and some with the kids, who were in general hardworking, easy-going, well-behaved students who wanted to be there. One teacher memorably said to me “so you’re in your twenties and you don’t know what to do with your life. This is as good a place as any to figure that out.” I liked watching the teachers teach. I appreciated the skills the kids were learning. I enjoyed clown lessons and voice lessons as much as the kids did, and just a couple times they did analyze their parts for character development, beauty of language and meaning.

And then somehow I became the manager of the McLaren session. As an intern, you report to the teachers, who report to the manager, who report to the head honchos at the office. Somehow I’d skipped a step. So there I was, an English major managing professional actors/teachers and 30 campers ranging from 5-16, and the first thing I did was forget the keys. 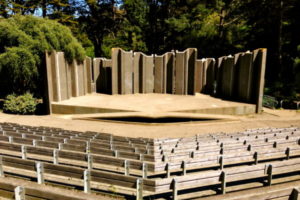 Aside from bringing keys and materials, it was my job to work with parents, help kids, assist and manage teachers, enforce discipline, and make sure that all three plays went smoothly. This required two and a half hours of driving each day, in rush hour over the bridge, and daily reports.

All the minor insecurities from my previous session intensified in this new position and they all boiled down to one central theme: “I don’t know anything about this.” If they had wanted me to explain Shakespeare’s sonnets, or write 20 page papers on Twelfth Night, that I could do. But these were little kids and I didn’t even know how to talk to them, let alone convince them to participate. These kids at age eight knew more about theatre than I had ever known about it in my entire life.

I’m of the opinion that talking to children is a learned skill, and one that only gets better with practice. Maybe I just hadn’t had enough practice. So I watched and listened and tried to learn from my fellow teachers. My favorite quote from one of the teachers for the older group was “I feel like I failed sixteen times today,” while my favorite method for dealing with the tiredness of 5-8 year olds was the end of day clown dance party.

I understand the sentiment of that teacher. When I couldn’t get one of the campers to stop crying for an hour I felt like I failed. When one of the campers asked me about how to “compose good stage picture” for a scene, I felt like I failed. It was undoubtedly the most stressful work experience of my entire life. I came home exhausted and woke up early to exhaust myself again. At the end of the session I had developed a fever–no doubt transmitted via small germy child and exacerbated by stress.

But for all of that, the kids had a good time, and they seemed to actually like and enjoy their plays. Which made me think a lot about the way that we teach Shakespeare. Campers were tasked coming up with gestures for each line they were meant to memorize. In doing this they had to come to terms with the language immediately. What exactly was a “mead” and what was an appropriate gesture for it? How could they understand quickly and be able to translate that for an audience? What was the picture they wanted to create? Daily activities included a voice lesson, using Shakespeare’s lines to find where sounds originated in their bodies and ways to project the feeling of the sounds as much as the meaning. There were also art lessons, combing the text for clues about setting and set design, understanding the mood and the ways their set might interact with them.

I think sometimes we want to teach as we were taught. Because we as English nerds find beauty in the language and the story and so don’t mind hearing it read to us, we can forget the benefits of other ways of learning on top of or in place of that. It’s a very common idea that Shakespeare’s stories, if not his language, are universal. But I think they only become universal if they are made so through good teachers. I think that while I find theatre exhausting and confusing, and I don’t like being a part of it, it is a tool to be used in illuminating English. Understanding a story enough to physicalize and amplify it through yourself can make what many see as the stuffy study of literary analysis into something deeply personal for the audience, but especially for the actor. Or the student, as the case may be.

It was a strange summer. And honestly I’m still not sure if I enjoyed it or not. I know that I would never commute that far again. But I also know that I kept the card that one of the kids gave me: two stick figures, one three times the size of the other, a sun, and the words “best teshr.”