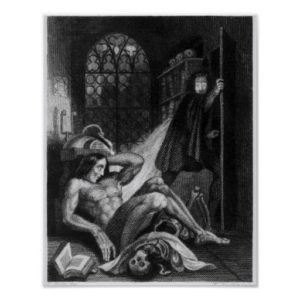 Professor Kasmer, Associate Professor and Chair of the English Department, began the Frankenstein at 200 Symposium with her own thoughts on Shelley’s novel. Her deep love of the text was displayed as she brought her own studies in Marxist theory, postcolonialism and trauma theory to her analysis of Frankenstein. She depicted within the work the issue of “beautiful failure,” including failure of the legal system, of marriage, as well as of creation. These failures, in particular Victor’s failed experiment, come from a lack of awareness that parallel the failed policies of the modern nation-state: both orginiate in trauma to the Other and attempt to erase that suffering through claims of providing security and conceaing involvement.

Professor Kasmer focused, in particular, on the failed paternalistic policy of colonialism, embraced within the nineteenth century. As part of this discussion, she pointed to the trauma caused by the consolidation of lands that may have distinct cultural identities. She also focused on the roles maps made by Europeans had in identifying colonies as being “empty” or unknown, ignoring the native populations living in these areas. In her attention to the devastation caused by European colonialists, Professor Kasmer connected these ideas to Frankenstein by revealing Victor’s actions as also stemming from blind self-interest shown in his inability to see his own creation until it is alive before him when he then reacts to it in horror.

This introduction given by Professor Kasmer proved to be a solid opening to the exploration of the novel that was continued by the rest of the speakers at the conference. Frankenstein is a rich text that, like any good novel, can be interpreted through countless lens that have changed throughout the novel’s long history. Professor Kasmer’s talk brought up the issues of the sovereign state and trauma that are significant in understanding this book. Through the focus on failure we are more able to see the devastation caused by myths of paternalistic state policies, just as by Victor Frankenstein’s belief that he can create life. Professor Kasmer provided a unique interpretation of this text by encouraging us to connect the novel to the broader history of Britain as well as place it within its cultural context.