The English Department’s Prentiss Cheney Hoyt Poetry Contest is named in honor of a much loved Professor of English at Clark who taught from 1904 till his death in 1920. He is reported to have been devoted to his students through not only teaching them English, but also coaching them in drama productions, and even playing tennis with them. He was described as being “a colorful figure, a big, blond, Vermonter with a Vandyke beard.” Professor Hoyt was heavily involved in his community as seen through his leadership of a Boy Scout troop and superintending of Sunday school for about 10 years.
He first arrived at Clark in 1904 as an assistant professor and became a full professor in 1909 until his death in 1920. Sadly he died of a heart attack during his Boy Scout troop’s baseball game before he had the opportunity to devote his retirement to writing. By all accounts Professor Hoyt, truly enjoyed devoting his time to his students academically as well as socially. He was a fondly remembered member of the English Department faculty whom we are now able to know and continue to appreciate through the still existent writing contest in his honor. Last year’s winners of the contest were Cassidy To ’17 with the poem “I am,” Maria Connors ’20 with the poem “Tidal Eyes,” Jessica Hoops ’18 with the poem “Revelation,” and Genevieve Mahoney ’17 with the poem “The Cat Called Kitty.” 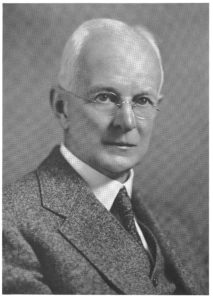 Another contest in honor of a former English Professor is the Leroy Allston Ames Essay Writing Contest. The award was first created in 1985 by one of his former students, Charles B. Cohn, Class of 1935. Before his time at Clark, Professor Ames graduated from Philip-Exeter Academy and Harvard University in 1896. He lived from 1875-1968 and taught English at Clark from 1908-1944. Professor Ames was admiringly described by his student, Harold Blanchard, as “possessing the rational judgement and firm control of a classical personality, but not without the aesthetic experience and imagination we associate with the Romantic spirit.” His favorite author to teach was reported to be Shakespeare. Unfortunately, Professor Ames died in 1968 but the writing contest created in his honor speaks to his continued legacy in the Clark English Department. The contest is awarded to the best essay written about any topic in nineteenth-century England. Though none of the current faculty or students knew Professor Ames, the impact of his many years at Clark and his devotion to the teaching of English are still felt through the continuation of the writing contest each year. Our most recent winners of this contest are Nadia Friedler ’17 with her essay “Sympathy, Imagination, Sight: Trauma and Othering within Mary Shelley’s Frankenstein” and Logan Manchester with her essay “The ‘Other’ on the Island and in the Attic.”