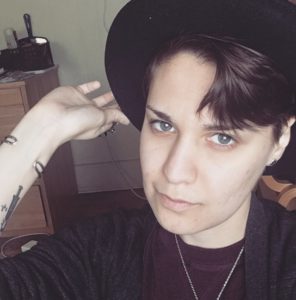 I was recently able to interview Senior English and Studio Art Major, Mal Sklar, about their upcoming thesis. Mal is heavily involved in many clubs across campus, formerly being in charge of Clark University Player’s Societies prop, set and costume design, and currently working with both the Clark University Film Society and the Beekeepers Club.

Mal Sklar’s current thesis, a novel entitled New October, differs from many of the other theses, as it is a creative pursuit rather than a research project. New October follows the life of Rowan. Rowan’s mother, who observed a faith that sought guidance from nature, naming their children after trees, has recently passed away. Rowan, now alone, goes into the woods near her house where she encounters a mysterious man named October who leads Rowan into a mysterious world of ancient spirits and deities.

Despite the creative nature of their thesis, Mal has not taken a creative writing class at Clark. Instead, much of Mal’s inspiration comes from their own experiences and books they have read. New October was inspired by a dream Mal had where they were the King of Halloween and killed a woman’s husband who now sought revenge against them. In addition, Mal has also sought inspiration from their favorite writers, primarily Diana Wynne Jones and Neil Gaiman.

Jones has been Mal’s favorite author since childhood, fondly recalling her works like Hexwood and Fire and Hemlock.  Mal stated that what made Jones’s work truly enjoyable was that she had an amazing sense of vagueness whenever she wrote more fantastical elements such as magic. The magic wasn’t overexplained in how it functioned, allowing the reader to draw their own conclusions as well as making a more dynamic, as well as comedic, atmosphere in the book. This, as well as a dry sense of humor, made Mal feel that Jones didn’t talk down to her younger audience.

With Gaiman, Mal enjoyed how he was able to tell an entire story in a relatively short timeframe. The stories didn’t need to be conclusive; they could just be snapshots in a character’s life that were merely interesting to the reader. This helped Mal to condense their own ideas into what would be most interesting to the readers and what was unnecessary to the overall story.

In addition, Mal’s advisor Prof. Lisa Kasmer,has been helpful throughout the writing process, allowing Mal to bounce and formulate their ideas off of another person and get concrete ideas onto the page.

By reading their novel Mal hopes the reader will perceive it as a love letter to all of the fairytales they read as a child, stating that readers will learn “that lesbians are out there doing magic in the woods.”