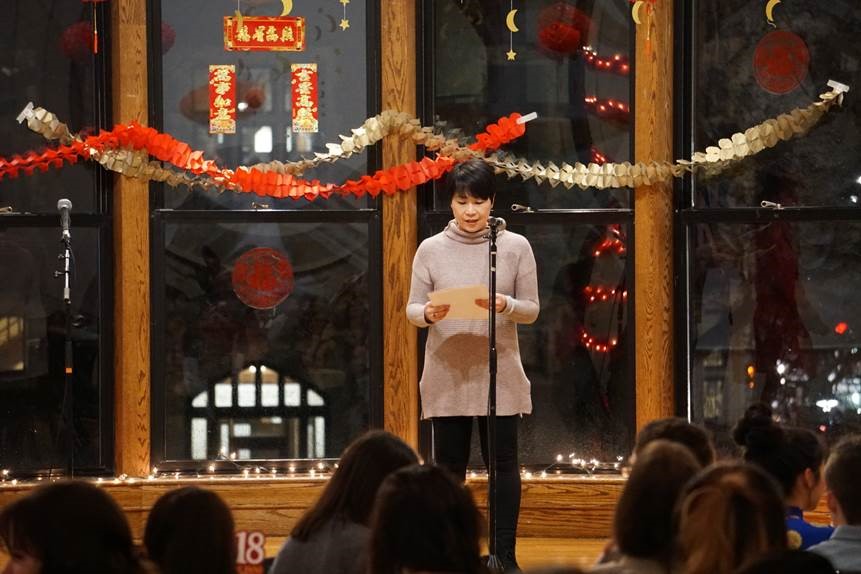 Professor Betsy Huang of the English Department was invited by the Asian Culture Society (ACS) to give a moving welcome speech at their Lunar New Year celebration. The annual event took place on the evening of February 23rd in Tilton Hall.

The Lunar New Year is a holiday observed by several different Asian countries, with most countries celebrating on different dates. However, ACS chooses a date each year for all Clark students who wish to participate.

“Our celebration of the Lunar New Year…is a ritual that strengthens our transnational ties and our deep connection to our Asian and American roots,” Prof. Huang remarked in her speech.

Although the dates vary, the traditions practiced are largely similar across nations. Usually, these rituals include sharing food and giving or receiving money. The celebration is meant to remind people to leave behind the difficulties of the past year and move forward with optimism.

However, in her speech, Prof. Huang challenged the boundaries of what Lunar New Year can represent. “To me, a good future is made possible only through our unblinking recognition and remembrance of our past,” she argued. “To forget or erase the past is to engage in a kind of blind optimism that allows the repetition of past tragedies.”

She mentioned a number of these past tragedies in the United States which targeted various peoples of Asian descent, ranging from the Chinese Exclusion Act to Japanese internment camps to the Vietnam and Korean Wars.

“Whether we’ve been here for four years or four generations, a residue of alienation persists for us,” she explained.

Prof. Huang also reflected on her own personal history in the U.S., describing her move from Taiwan to New York when she was ten years old as “science fiction-y.” Even still, she said, it can be uncomfortable to live in the U.S. as an Asian American because this difficult history is often overlooked.

“We have made a home in a place that has waged war with Asian countries for much of the twentieth century,” Huang said.

She invited the students to enjoy the celebration of the Lunar New Year, and look forward to the coming year, but to do so thoughtfully and with consideration for all the occurred in 2017. She suggested they could do this by enjoying the excess of food but still being mindful of consumption and poverty, as well as thinking carefully about how to give money in keeping with new year traditions.

Prof. Huang also spoke about another ritual of the Lunar New Year which is the idea of dancing with lions to ward off bad fortune. She likened this to protesting, and encouraged students to lion-dance (protest) many of the changes being made against refugees and immigrants, as well as other issues in the U.S.

“So we do not forget nor avert our eyes,” Prof. Huang stated. “We remember what the previous year was like and we make sure the new one looks nothing like it.”

Professor Huang is a full-time faculty member of the English Department and the Director of the Center for Gender, Race, and Area Studies. She will teach ENG 276/376 Ethnic America: Literature, Theory, and Politics in Fall 2018. To read her complete speech from the event, click here.