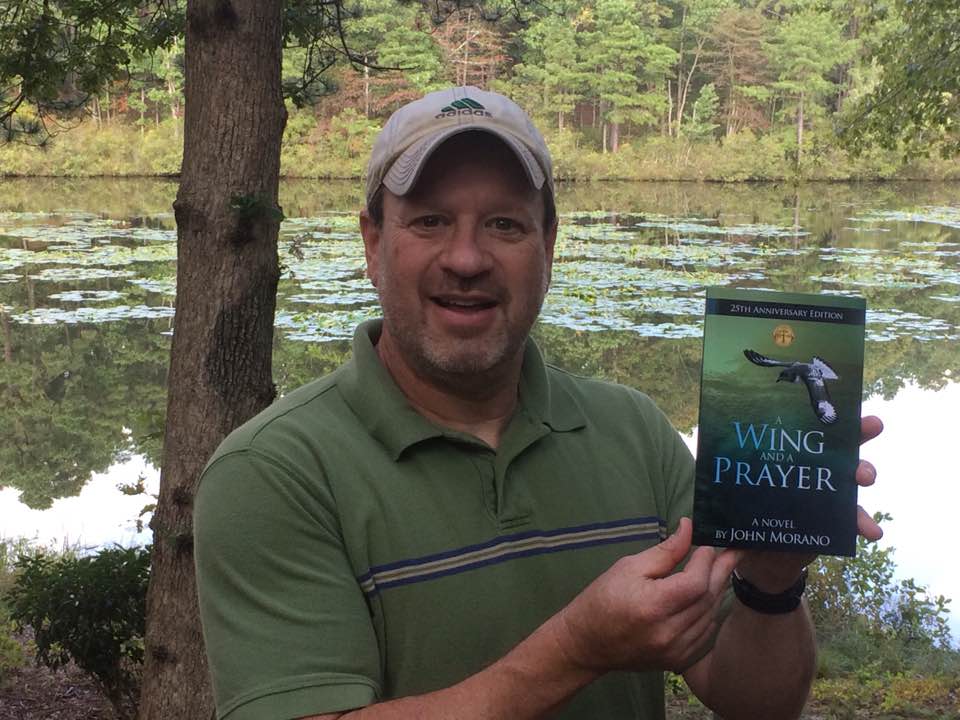 The English Department is thrilled to welcome John Morano ‘82, professor of Journalism, Monmouth University and author of the Morano Eco-Adventure Series to our campus this March. His work, which focuses on the lives of endangered species, has been endorsed by World Wildlife Fund, The Nature Conservancy, The Ocean Conservancy, and The American Society for the Prevention of Cruelty to Animals, among others. In his time at Clark he majored in English and Screen Studies, worked at the Scarlet and played basketball. Now he’s coming back for a limited time only, to answer your questions about his novels, writing, journalism, and environmentalism.

Are you excited yet? Well enjoy this short interview to start thinking about what you want to ask at his talk, Giving Voice to the Voiceless, on March 15th.

What inspired you to start writing environmental novels?

I was on spring break while in grad school, visiting my retired parents in Florida. I was frustrated that I hadn’t written a book yet, but I didn’t really have an idea, something that just took me over. While sitting on my parents’ porch a reporter appeared on the television. She was standing next to a cage. She said, “Inside this cage is a Russian, woolly, three-toed, hamster.” It was some utterly obscure species. She continued, “This is a male. He’s the last of his kind. And when he dies, as he surely will one day, the planet will never see this animal again.”

That’s when I knew what my book would be. Extinction. What could be more dramatic? What could be more timely? What could be more important? And then I realized that we were talking about a hamster here. It would take me 300 pages to move it across the room. I decided that I needed a different animal, a bird perhaps. Then I could make the story global through migration. A sea bird, because I grew up on the beach, in the bays. It was something I knew a little about.

So, I spent the rest of my spring break in Florida in the town library looking at books about endangered and threatened species rather than on a surfboard. When you find yourself driven to do something like that, then you know you have a story to tell, a book to write.

How did you make the transition from journalism to novel writing?

I actually had one of the greatest jobs someone could have. I got paid to go to the movies, the theater, concerts, to listen to music, to interview creative people. It was wonderful. I was working in New York and Los Angeles. But after a while I had this idea that I couldn’t shake. I kept wondering if I was going to spend my entire life discussing some other person’s movie, book, play, etc. Or, was I ever going to do something where people reviewed me?

Again, being an editor/critic is a dream job, but I felt compelled to produce my own work, to make my own statements. When I decided that I wanted to write environmental novels and teach at a university, it just felt right, so I pursued it.

Your novels are told from the perspective of the animal, what are some pros and cons of writing in that way?

Essentially, I’m a journalist, something that began when I was a sophomore and walked into The Scarlet at Clark and announced that I was their new film critic. When everyone stopped laughing, they gave me a shot to cover a film, The Empire Strikes Back. I’ve been writing for publication ever since.

So, really, it’s this journalistic foundation that serves as a pillar of what I do creatively. There’s a journalistic ethic that says, “Give a voice to the voiceless.” That’s what I’m trying to do.

If you buy into that ethic, and I do, then who is more voiceless, more in need of having their story told than an endangered species, or an imperiled habitat? They cannot speak for themselves. They cannot hire public relations agencies. And they will disappear if no one knows their story. And so, what better way to tell their story than through their eyes?

In order to get it right, you have to know their world. And that takes a bit of research. For me, it’s a labor of love. I find it wildly fascinating.

Perhaps, for some readers, having the story told for the most part from the animals’ perspective might distance them from the drama. But if I’m doing my job well, my hope is that I will be able to pull these people into the story in a way that they can identify, not only with the specific animal or habitat being discussed, but with endangered species and imperiled habitats in general. And once that happens, it gets easier to see connections in your own backyard, if you will.

You deal with some complicated themes in your writing, like feminism, race relations and religion, do you have any advice for writing about complicated subjects for a younger audience?

I’ve had critics say that the books do a good job of taking complicated themes, especially from science, and making them accessible to mainstream readers. Again, I think that underscores that a journalist is doing the writing. It’s something the press does everyday. Reporters talk to experts, ask them relevant questions, and then share the message with readers. The idea is mass communication, not mass confusion. Having a background in that world has served me well as a novelist who would like to confront issues, rather than avoid them.

How did studying at Clark impact your writing?

Had I not studied writing at Clark, I would never have published a word. I came to Clark as an under-prepared basketball player from a public school in New York. Clark taught me many things. First, I learned what I didn’t know, and that was A LOT. Then, I learned, “I can. It’s possible.” So, I went to work. I declared a double major and joined the school paper. My grades went from C’s, to B’s, to A’s. My professors told me when I made mistakes, and when I got it right. My two majors, English and Screen Studies, allowed me to write a screenplay for my senior thesis. They gave me space to explore, to mature, and set standards that always challenged me in productive ways. Clark enabled me to become what I was capable of becoming, something I didn’t really know was in me.

The best thing a professor can do, I’ve been one for 30 years, is to ultimately make yourself obsolete. My point is that if the professor has done the job well, they will no longer be needed. The students will be able to teach themselves whatever they want to learn on their own for the rest of their lives, because their education is so good that they are empowered to do that. Clark did that for me. We didn’t even have a journalism program, yet Clark English, The Scarlet, the Screen Studies program, positioned me to be able to become an editor/critic at national magazines, to attend one of the best journalism grad schools in the country, to be a professor of journalism at a fine university, to author multiple books. All of these things come back to Clark, all of them. Clark taught me how to think, how to work as an academic, and made me believe I could do it, if I was willing to work for it.

What can students expect from your Creative Writing Workshop here at Clark?

What I’d like to do at the workshop is walk students through a `how-to’ for writing environmental novels. I’ll explain my method and how I came up with it. We’ll discuss characters, settings, story lines, subplots, tone, research, etc. I’ll answer any questions. I’ll share drafts and tell some stories of behind the scenes issues that writers might encounter. We can discuss the publishing process, some do’s and don’t’s.

I certainly don’t expect people to be me (I wouldn’t wish that on anyone), but sometimes when you hear how someone else works, you can gain insight into what does or doesn’t work for you. That can be valuable.

To hear more about his impressive career and time at Clark, mark your calendars for March 15th, Creative Writing Workshop at 11:45 am and his Talk & Book Signing at 5 pm. This event is co-hosted by the departments of International Development, Community and Environment (IDCE), and Environmental Science (ES).