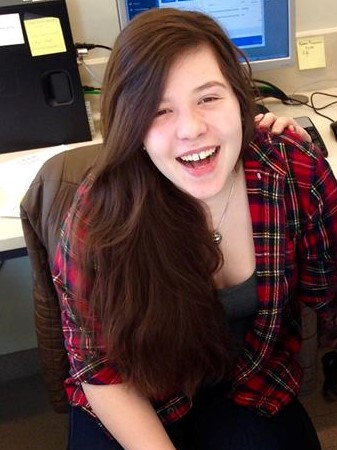 This week I had the pleasure of talking with Samantha Poole, a senior English major and longtime friend of mine. Samantha, who is the cousin of Clark alumna Freya Henderson, has many interests at Clark: she is president of Clark University’s French Club; the director of marketing for NET Impact, which focuses on sustainability and social justice; an RA; and part of Clark’s Emergency Medical Services. This week I was able to interview her about her current project: her English Honors thesis. For her thesis, Samantha is researching Voltaire and Shakespeare, more specifically Voltaire’s translations of Macbeth and Hamlet into French and the differences between the original texts and the translations.

Combining her love of French and literary studies, this project was inspired by her reading different translations of Shakespeare, one of her favorite authors, while studying in France. In the summer of 2017, Samantha studied in the French city of Rennes. Here she stayed with a host family and found the entire community to be tightly knit. The community was relaxed and amiable; her host family would regularly host parties with their neighbors, and on Sunday the community attended the neighborhood market together. Through her studies in France, Samantha found that the consensus on Shakespeare’s writings was that they were oftentimes seen as crude. This cultural consensus sparked an interest in exploring the ways in which cultural differences and language barriers affect translation.

Samantha’s thesis is based on the theoretical standpoint that there is a palpable degree of ambiguity in language, such as Jacques Derrida describes. This ambiguity is especially prominent in translation, with many words not being able to convey the same range of emotion as the original text, resulting in an inexact translation. Voltaire’s translations of Macbeth and Hamlet even have different titles, with Hamlet being renamed Zaire and Macbeth being renamed Mahomet.

In particular, Samantha found that Voltaire’s translations were less violent and used more eloquent language than Shakespeare’s plays. She feels that Voltaire’s translation might be responding to the differences in the national identities of eighteenth-century England and France. In the eighteenth-century, the French tended to follow Aristotle’s rules regarding drama that emphasized unity in action, time, and place. They possibly saw this focus as allowing them to appear as more refined. In contrast, Voltaire found Shakespeare’s plays to be barbaric, just as the French viewed the English.

For her research, Samantha has been working with English Professor Lisa Kasmer and French Professor Alison Fong, who she considers to be absolutely essential to her work. They have helped her to examine the issues of national identity, cultural differences and translation more closely. Samantha hopes that her thesis will help readers to develop more of an appreciation for the work put into translation and the ambiguity of language.

Samantha Poole is a senior English and French double major. Upon graduation, Samantha hopes to teach French either abroad or in America.

A Year Later and a Spring in our Step