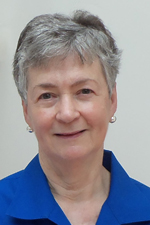 Professor Vaughan first became interested in studying English due to her early love of reading. While in high school she was inspired by her AP English teacher who taught her students Shakespeare and exposed them to films of Shakespeare’s plays. In college she became an English major but soon noticed that there were no female professors teaching English. When she attended the University of Michigan she saw a similar pattern where there was only one female professor out of 80 male ones. This convinced her that she should teach at the secondary level rather than at a college or university. However, after teaching 9th grade English for one year she was encouraged to return to college to earn a doctorate degree.

When asked what she enjoyed about teaching at Clark, Professor Vaughan said that she loved her students since they allowed her to continue learning from their ideas and questions that forced her to rethink some of her own preconceptions. She loved that many of her students were thoughtful as well as proactive. Another aspect of Clark that she liked was that its small size allowed for many opportunities of interdisciplinary collaboration. During her teaching career, she taught classes with faculty from both the Theatre Arts and History Departments.

In response to the question of what she thought the value of continuing to study authors such as Shakespeare, she stated that Shakespeare is currently relevant since he raises many questions that we’re still asking today. Professor Vaughan gave examples of his history plays raising questions about power, the comedies questioning romantic love, the tragedies concerned with moral questions, and the romances as dealing with issues of spirituality. She discussed that during her own experience of studying Shakespeare, her focus has shifted from a New Criticism attempt to “nail the meaning” of the text to one that appreciates the openness of the questions raised in the texts as well as their lack of solutions. She now thinks of Shakespeare as being a great “asker of questions.”

Professor Vaughan is currently working on finishing her recent book, Shakespeare on the Gods. In this book she is focused on 6 Greek and Roman gods that Shakespeare refers to and who at times actually appear in his plays. Her goal is to help current audiences or readers who may not have read Virgil, Ovid, or Homer understand the meanings of these gods in the ways audiences during Shakespeare’s own time would have. She also continues to teach Shakespeare in a class for senior citizens, which is studying King Lear and The Tempest.

Within the English department there is a prize named after Professor Vaughan that is awarded to senior English Majors for the Most Outstanding Honors Thesis. She explained that this award was created in honor of her by one of her former students. While this student had been a History major, he still took classes on Shakespeare with Professor Vaughan while at college. It was later in life that he decided to honor his former professor by creating a student prize in her name, which attests to her lasting impression on the English Department and Clark.