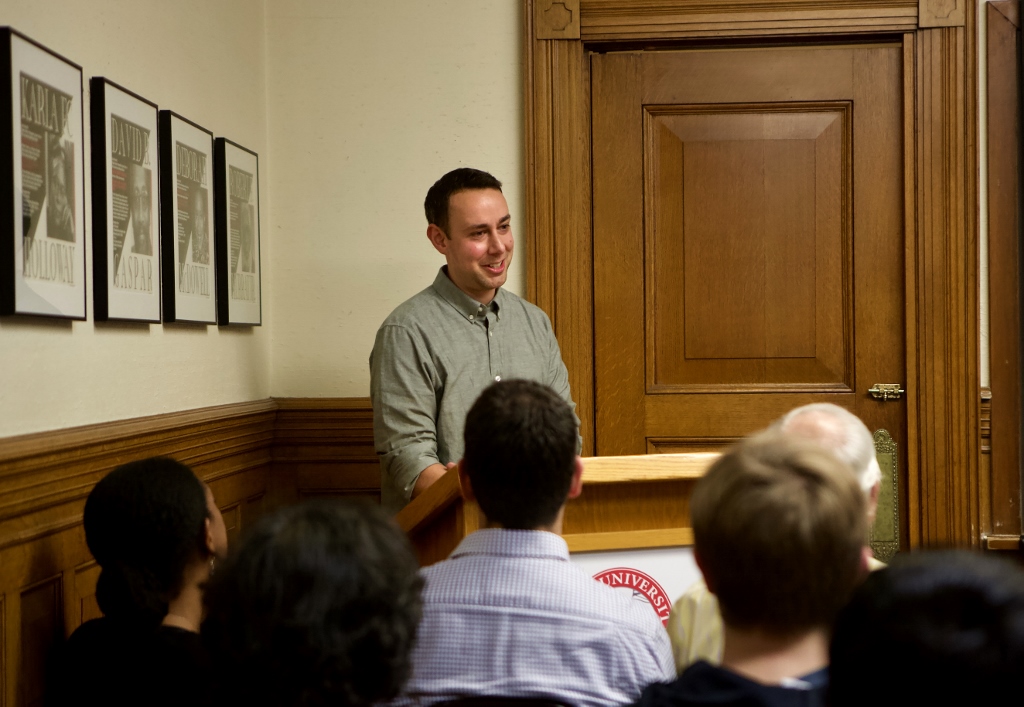 On October 11, Clark alum, Scott Zimmerman gave a talk on his experiences as a Clark English major: he showed how the lessons provided by works of literature, along with their persistent yet adaptable vision, can lead to success in any field. Zimmerman, a graduate from the class of 1999, is currently the Vice President of Product and Merchandising for Carhartt Inc.; formerly, he was the Director of Global Merchandising for New Balance and worked in marketing for Nike and the NBA.

Since his youth, Zimmerman had an interest in athletic wear and how it functioned, with one standout moment being when he cut open a pair of Air Jordan V’s (a shoe whose collector value is currently estimated to be around $10,000) to see what was inside. Though Zimmerman possessed a desire to work for major athletic companies such as Nike in college, he became interested in English courses, an interest he insists gave him great resources for his eventual career in marketing.

The insight that Zimmerman found through the texts he read as an English major helped him to succeed and better understand the demands and complications that can arise when overseeing the marketing for major international companies. Zimmerman said that works such as Herman Hesse’s Siddhartha and Chinua Achebe’s Things Fall Apart allowed him to view things from a global perspective, as well as to understand cultural differences that could impede a product’s reception. One such instance that Zimmerman had heard of was Nike’s marketing decision to release a shoe called the Black and Tan, so named for its color resemblance to a pint of Guinness, on St. Patrick’s Day. Unfortunately, this decision was met with backlash from the Irish community as the term Black and Tan can also refer to a military branch of the Royal Irish Constabulary who became infamous for their attacks against Irish civilians.

Zimmerman’s talk provided many current and prospective English major’s keen insight into how an understanding in literature allows one to succeed.