Student Contributor Jim Lochhead (International Development and Social Change ’16) shares how his first semester at Clark University came with a sense of detachment between graduate school in Worcester and his home city of St. Louis during the fall out of the Michael Brown shooting in Ferguson, Missouri.

It was particularly trying to leave my home city of Saint Louis, Missouri, last fall to start my master’s degree in International Development and Social Change at Clark University. Officer Darren Wilson had shot Michael Brown three days before my departure. As I sat in orientation listening to our professors share their wisdom on international development and being scholar-practitioners, I couldn’t help but agonize in the irony that I was studying international development in Massachusetts while the city I loved was burning.

For years, I lived in what Cornell West would describe as the poor black slice of North Saint Louis, working to bring people of different races and classes together. In this historically critical moment, I was in Massachusetts reading about social movements in Latin America, as protesters were marching outside of my mother’s house and occupying my alma mater, Saint Louis University.

The only thing that kept me from turning hatefully bitter for the remainder of my semester was the passionate response to Ferguson by faculty and staff at Clark. The grass roots movement created by fiery students and those willing to better understand the source of the protestors’ anger became a community I am particularly thankful for. 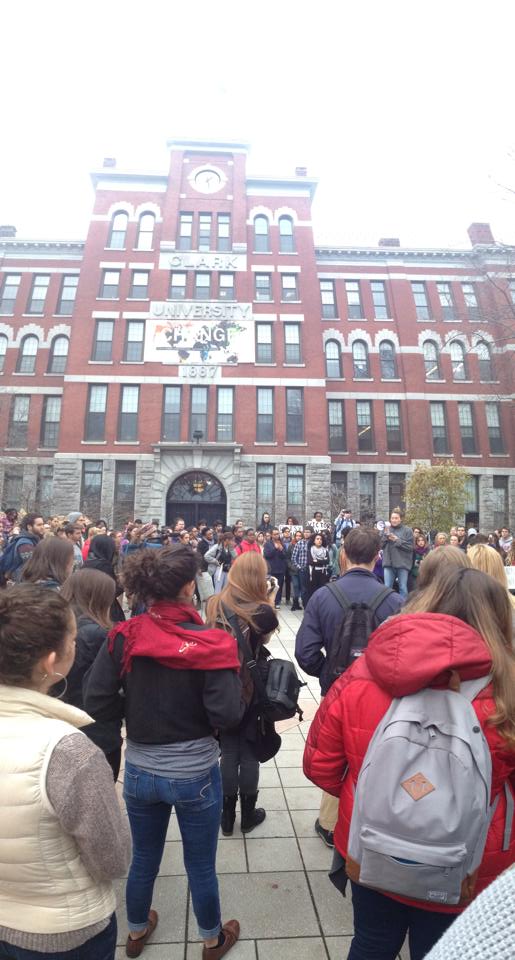 Students gather in Red Square outside of Jonas Clark Hall.

While my friends in Saint Louis were marching and shutting down shopping malls, it felt incredibly gratifying to march down Main Street in Worcester to show solidarity with Saint Louis and to call for the end of structural oppression of people of color. Though I could not physically be present in St. Louis, I could act locally and work with classmates to examine how gender roles and power relationships came into play here at the university. Development Theory became very personal as we spoke not just about how the ‘Global North’ intervened in the ‘Global South,’ but — as a grad student, sharing class with women, people of color, and international students — how to check my white male privilege for a better, more just learning environment.

As such, one of the highlights of my first semester was organizing the Voices of Ferguson/Voices of Worcester conference with Professor Jude Fernando and other peers. We invited Dr. Stefan Bradley from Saint Louis University and Dr. LaTanya Buck from Washington University, as well as local community activists, who all did a great job sharing their experiences and eliciting crowd participation.

Though issues of racism and segregation have been important to me for the majority of my life, I feel like I have learned a great deal from the presenters and the personal testimonies of Clark students and residents from the Worcester community who came to the event.

Like Saint Louis, Worcester and Clark University have a long way to go in becoming models for structural justice. It is a highly contested issue that not everyone sees eye to eye on: Many in 2015 do not recognize the structural racism that people of color still face here in the United States. Still, there is a group of dedicated students and faculty, and the Worcester community, who are taking on this issue in a creative way. They have inspired hope in me that we can create a more just society, including taking initiative to look at how we address issues of race here at Clark University