Anita Fábos has been working with refugees for almost 25 years, including research and practice in Cairo and London. Today, Professor Fábos is contributing to numerous projects in Worcester that bring Clark students to work alongside members of local refugee communities. 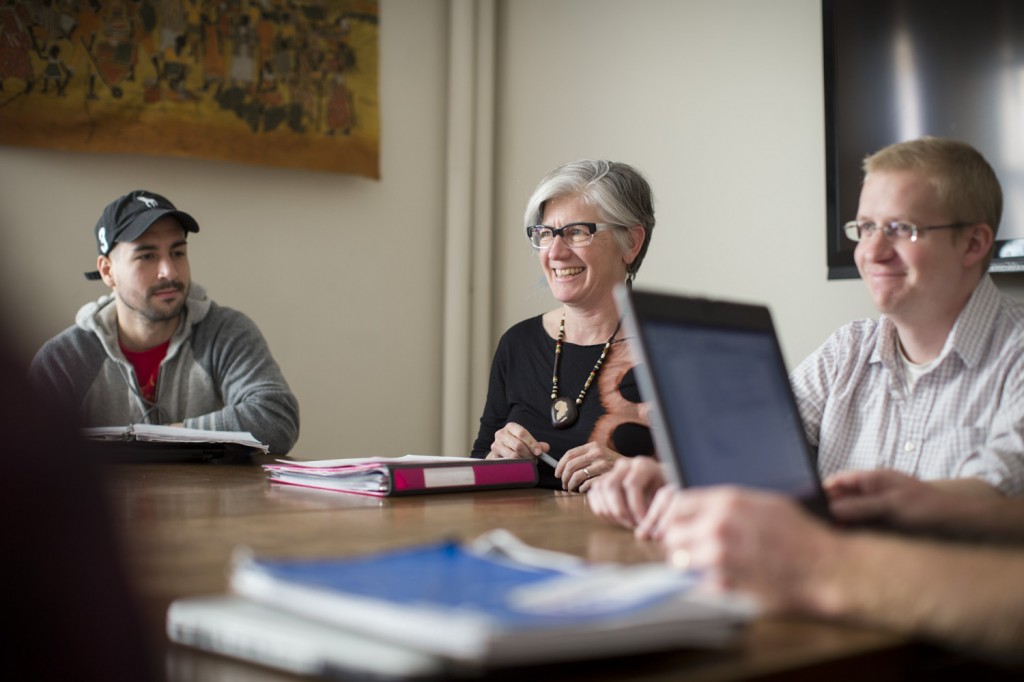 Since joining the IDCE department in January 2009, Professor Fábos has been establishing connections between forced migration and development issues in courses such as Displacement and Development in the Contemporary World, Cultures of Exile, and Conflict, Forced Migration and the State in Sudan and the Horn of Africa.

Displacement and Development in the Contemporary World

‘Development’ thinking tends to focus on settled people at the local or national level. Policies towards ‘refugees’ on the other hand have often addressed the global displacement of people around the world as emergencies, crises, or conflicts between newcomers and the societies that receive them. Population mobility has played a major role in human history but forced migrants are largely absent from funding for development projects.

Professor Fábos’s field-based experience in Cairo examined how Sudanese refugees were “included, but not included” in Egyptian development initiatives. From this grew the kind of thinking that Professor Fábos (and other practitioners) are introducing to students at Clark: to help them look beyond rigid boundaries between development and migration and to perhaps recognize their own “continuum of movement.” Through this lens, Professor Fábos hopes students will begin to relate their own stories to those of modern-day refugees.

People on the Move Signature

The International Development, Community, and Environment Department’s “People on the Move” signature is connecting migration, forced migration and refugee studies to key debates about development, conflict, and environmental change through action research and practice.

The course “Cultures of Exile” immerses students in the dilemmas and predicaments of belonging, estrangement and exclusion, which are present in refugee art, poetry, films and writings. One of Professor Fábos’s goals is to include students and local refugee partners in research that is important to them, while also highlighting the stories that people tell of belonging, “which really gets at the heart of the ways societies could be more inclusive.” To interface with the local refugee population, students develop projects with community partners to gather stories and understand the experiences of exile for refugees in Worcester.

One of these collaborations involved students and young Bhutanese refugees who collaborated as co-members on an Oral History project. Together, student-practitioners and their Bhutanese counterparts connected with members of the Bhutanese community and collected stories from the elders. Communication was facilitated by the Nepali speakers and stories were shared between both parties. The result is one of a number of contributions by faculty and students to a bigger IDCE project: the Refugee Archive at Kasperson Library, due to be launched in December 2014.

Future Projects for Clark and Worcester

The Kasperson Library will soon be home to Clark University’s Refugee Archive, an academic and community resource that will gather together the preliminary research conducted by students and faculty on Worcester’s refugee population.

Also in the works is a new course that will add to IDCE’s community of effective practice: Cultures of Exile Research Studio – Refugee Integration in Worcester. This field-based practicum class will teach students about American integration discourse as a tool of analysis in parallel to action research on integration for Worcester’s refugee populations conducted by students.

Professor Fábos has also partnered with Ascentria Care Alliance, one of New England’s oldest non-profits; and ARISE, where at least two IDCE Alumni are currently board members.