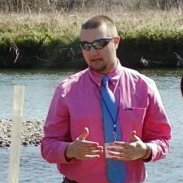 Steve Menges is a 2nd year, ES&P student at Clark. A native of Syracuse, New York, Steve completed his undergraduate degree at SUNY Oneonta, majoring in Adolescent Education and Earth Science.  Prior to attending Clark, Steve taught elementary science in the Syracuse Public Schools for three summers as a part of the Say Yes to Education Program. A nonprofit foundation, Say Yes to Education has a mission to “dramatically increase high school and college graduation rates for urban students.”  Having a strong interest in science and education, Steve came to Clark because of its reputation as an educational leader, its interdisciplinary learning, and desire to engage students in learning outside of the classroom.

In the fall of 2012, Steve worked with Worcester Energy as their Energy Analysis Intern. During his school year at Worcester Energy, Steve created the City of Worcester’s Energy Portfolio for all city buildings, developed databases for the city’s Residential Rebate Pilot, and edited the city’s Climate Action Plan.

He is currently interning for the Massachusetts Department of Energy Resources (DOER) working specifically in the Leading by Example program.  He is responsible for working on Massachusetts’ Enterprise Energy Management Systems (EEMS) and the new renewable thermal program with the Department of Conservation & Recreation.  Both of these programs were implemented with the goal of reducing energy consumption among state agencies and buildings throughout the Commonwealth.  The EEMS program was recently recognized as the best state project in the Northeast Region by the Association of Energy Engineers and has already seen dramatic results in reducing energy consumption.

Steve’s passion for the importance of education is reflected in his current role at Clark, where he works as an Academic Probation Advisor. His responsibilities include creating and assisting in the execution plans of students on Academic Probation to ensure academic success.

Steve hopes to work in the energy efficiency or energy markets field after graduation, either for a state agency or a private utility, with the goal of bringing these real world experiences back to a classroom to teach the next generation of students.