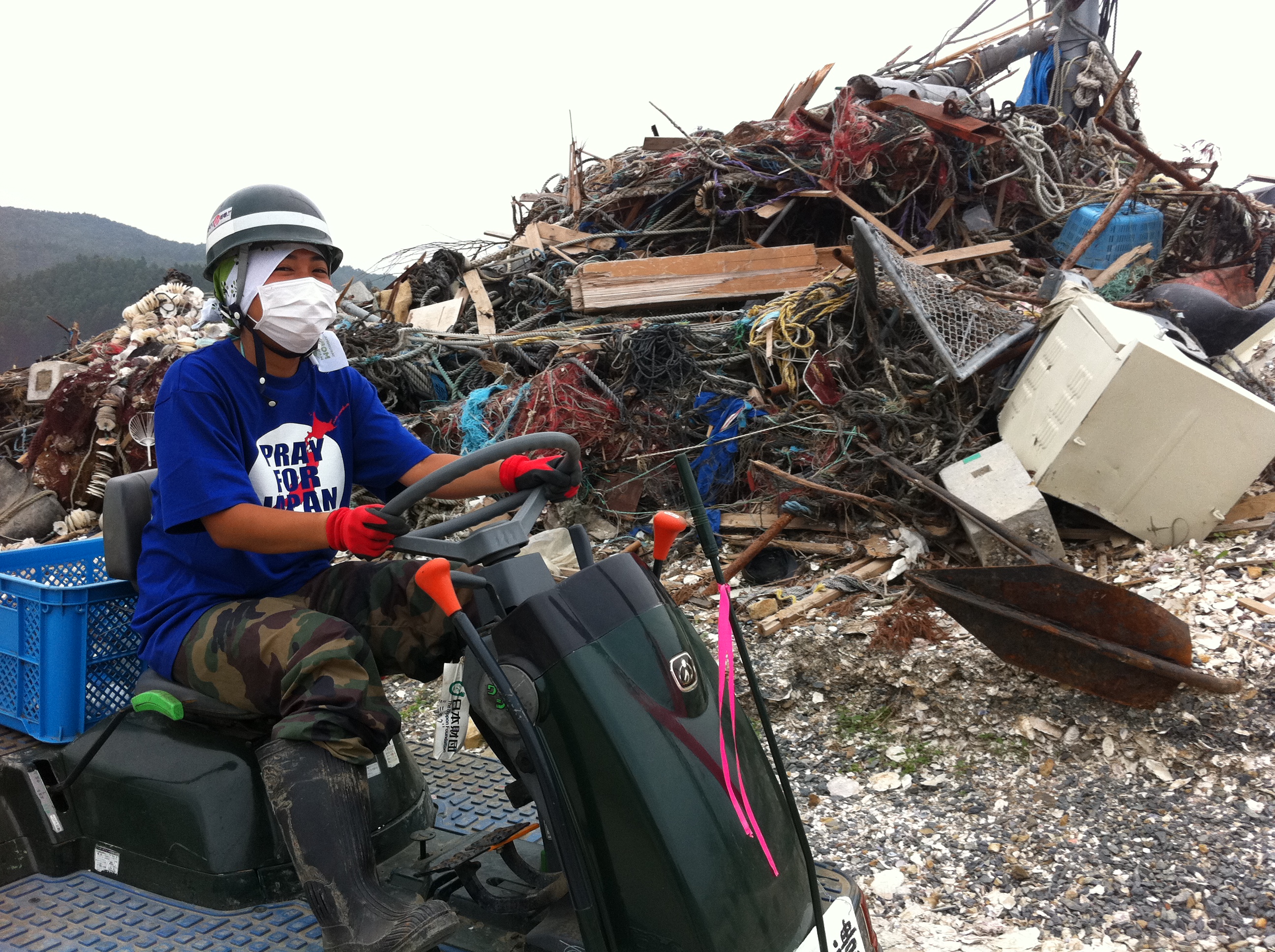 First-year IDCE student Eriko Nakanishi (IDSC) was traveling in Myanmar on March 11, 2011, when the devastating tsunami and earthquake hit Japan. A Japanese native, Eri arrived back in her homeland a month later and volunteered in the humanitarian aid effort. Her “internship” with Megumi Japan involved lots of dirty and dangerous work. To mark the one-year anniversary of this tragic event, Eri reflected on her experience and what it taught her.

Q: What was the decision or purpose behind your internship?

EN: I was traveling in a remote village in Burma (Myanmar) when the tsunami hit Japan. Information is restricted by the military junta there and the international phone line is very unstable. I couldn’t contact my family for two days. The only reliable information source was illegal satellite news channels in the underground cafe (but even CNN or BBC changed the information every hour!). It was a horrible experience, but I was touched by the kindness of the Burmese people. Many people came to me—an unknown foreigner—to share the sorrow, bring me food, and pray with me at temples. It saved me because I was frustrated that I was stranded far away when my people were suffering so much. When I left Burma I was determined to do everything I could for my people.

Q: What were the initial circumstances surrounding your internship?

EN: I arrived at the camping site for volunteers in mid-April (one month after the earthquake). It was the beginning of the shift from the rescue phase in which the public sector—the self-defense force and rescue squad—were the main actors, to the next step in which the nonprofit sector was gradually taking a greater part in field operations.

The mud/debris removal team was just about to expand their operation into more devastated areas, where the search for bodies by the public sector was completed. (It doesn’t mean they found all the bodies there.) Before then, My team was operating mostly in areas where damage was much less, and people continued to live on the second floor after the tsunami (not in evacuation cities).

Q: What was the name of the organization you interned with?

Q: How was the experience working with that organization?

EN: I liked the organization because their size was moderate. It was big enough to have some budget and human resources (especially automobiles: the organizations with budgets that were too small to afford enough trucks were not functioning well), but small enough to reflect my opinions in their policy. But on the other side of the coin, it was sometimes frustrating that the organization was very young and not well-established so the operation was sometimes not efficient (especially in budget management).

Q: What were your roles and responsibilities at the organization?

EN: I was Chief Volunteer of the Mud/Debris Removal Team. I did almost everything. Most of the time, I got my feet into the mud and carried broken furniture by myself to clean up the houses.  I instructed new volunteers (In fact, most of them were there for just two-to-three days, so we always needed someone to instruct them. At most, there were 300 newcomers. My phone never stopped ringing!) about procedures, safety, and mental health care to the victims. I also did door-to-door investigations and established the demand database. (There was no system when I arrived there, just random pieces of paper on which someone scribbled the address of the house to be cleaned up, and how to contact the owner. We set up a system to prioritize these demands, dispatch volunteers according to the areas, etc.). I was also responsible to communicate with the public sector (the most tricky part, many of the local officials were victims too, and their system was not functioning at all in some towns), and with other NGOs (the most exciting part was discussing the future plan or coordinating/collaborating the current missions).

Q: How did the earthquake affect the area you were in?

EN: It was one of the most badly affected areas. The tsunami reached 8.6m—around 28 feet—at the highest. More than 4,000 people out of 160,000 lost their lives or are still missing. Nearly 25,500 buildings were completely or mostly destroyed. The earthquake did not cause big damage to the area (nor to the other disaster areas); it was the tsunami. My area (Ishinomaki, Miyagi Prefecture) is located in an area that includes a long coastline, riverbanks, and bays. All these areas were devastated. Historically, the city had been a tsunami-prone area. This was the worst one in the last 1,000 years.

Q: How did you think the work you did helped the residents of that area?

EN: I contributed to clean up many houses in the area and people could go home and leave the evacuation sites. But I’m not confident if I really helped them. There still remain too many challenges waiting for them. The area has been underdeveloped for the past 30 years or so, and the most of the residents engaged in the fishery-related industry, whose entire infrastructure is destroyed. The residents are generally very old, so most of them have no income now and no job opportunities in the future. Cleaning up the house is a small thing compare to the future challenges they will have to cope with. But I want to believe that our existence and commitment showed our solidarity to them, and that some people were encouraged by that.

Q: Overall, what did you gain from this experience?

EN: I learned how to drive a big dump truck! It was very important for me because I learned there are so many things necessary other than academic knowledge. People who don’t know how to fix cars, like myself, were useless (if not obstructing) in the very tense forefront field. I need to be able to take care of myself at least. If I did my master’s without this experience, I think I would think my degree and academic knowledge by themselves would be able to help people.

Q: Do you think the degree you are attaining from IDSC will help you in your future career choice? If yes, how?

EN: Yes, there are so many practical, hands-on courses in IDSC. But my favorite part is that we can take classes in the other programs in IDCE, because disaster relief is very much related to geography and environment, too. For example, I’m taking Applied Aquatic Ecology (ES&P) this semester. I’m learning how vegetation of the riverbank mitigates a flood. This is not something I could learn in the development programs in other universities.

Q: So far, how has your experience been at IDSC and at Clark?

EN: It was very hard for me at first. I felt that I was abandoning my people whom I left back in Japan. When I was actually “doing something” on the field, talking to the residents, I could feel that I was helping someone however small each of our accomplishment was. Also, the fact that I was staying in a tent for almost four months, without being able to take shower very often, gave me a sense of relief since I was sharing the hardship with the victims. (I found how hypocritical I was only afterwards.) But away from my country, confining myself to the library and reading development theories was a completely different thing.  I could not imagine myself using this knowledge to help someone. Now, I’m getting used to the situation and the load of assignments little by little. I think I’m just taking a roundtrip to make myself more efficient and helpful in the field.