IT’S HARD TO BELIEVE THAT IT’S BEEN MORE than a year since the deadly January 12, 2010 earthquake struck Haiti. Knowing that the devastation was severe, and that rebuilding efforts would take years, outgoing President John Bassett and current President David Angel launched the Haiti Relief Initiative at Clark in an effort to organize long-term support for the ravaged country. IDCE faculty and students played a major role in the efforts and are now collaborating with a Haitian University in Les Cayes, Haiti on an exciting new field school that focuses on sustainable agriculture, food security, and biodiversity in Haiti. 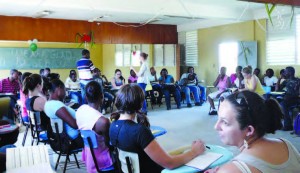 Immediately following the quake, Clark students hosted events and fundraisers to benefit the victims abroad. IDSC Professor Jude Fernando, an expert on humanitarian aid who has responded to other world disasters like the tsunami in Sri Lanka, emerged as a leader in the relief effort. He quickly arranged for himself and graduate students Sarah Belisea (IDSC/M.A. ’10), Hannah Caruso, Jeff Schuhrke (IDSC/M.A. ’11), and Shelagh Cooley (IDSC/M.A. ’11) to travel to Haiti during spring break of 2010 so they could assist humanitarian organizations and gather data on the relief effort progress. The group brought with them tents, medicine, and vitamins collected from the Clark community, as well as $2,500 raised during a collaborative concert/fundraiser with the local WOO Church that they later donated to a Haitian orphanage.

Since their return to campus, the five of them petitioned and succeeded in partnering Clark University with the University of Notre Dame d’Haiti, with an aim to create scholarships at Clark for displaced Haitian university students and create a long-term partnership with the Hatian university’s Agronomy Department by developing a Field School. “The field school was the first step in creating a hopefully lasting and worthwhile partnership for UNDH and Clark. UNDH is the ideal partner to create a center for sustainable development because it is a decentralized, agronomy school that has been doing sustainable practices, like cooperative farming with the community for years.” says, Shelagh Cooley.

In November 2010, seventeen Clark students spent their Thanksgiving break engaged in a field course further developing the partnership, gaining theoretical knowledge and hands-on experience, while learning about the economic, ecological, and social dimensions of community food security and sustainable agriculture. Led by Fernando and GISDE Professor Hamil Pearsall, they worked with staff and students from the UNDH School of Agronomy on an innovative 40-acre farm in Les Cayes, to talk directly to Haitian farmers and find out what challenges they face, including climate change and food security. Cooley hopes that, “Through the partnership with Clark, the capacity of UNDH to train Haiti’s next generation of leaders as well as develop and spread sustainable agricultural practices will increase.”

Together, Clark and Haitian university students conducted a survey on livelihoods, biodiversity, and environmental degradation in the rural community of Les Cayes. While participating in the field school, students attended over six lectures conducted by both Clark and UNDH faculty, as well as representatives from World Vision, USAID, Catholic Relief Services, and a local women’s organization. They saw first-hand the agricultural projects Haitian agronomy students are doing on the farm at UNDH and lived with rural families. They also visited the camps of internally displaced people and met with a student association organized by an orphanage in Leogane, the epicenter of the 2010 earthquake.

The course, part of Clark’s Haiti Relief Initiative, served as another way for Clark students to use their scholarship to learn from and assist the Haitian people, while bringing Clark one step closer to establishing a long-term partnership with the Haitian university. The students’ field projects in Haiti will now serve to comprise internships, course work, capstone projects, and research papers. Importantly, there are several ongoing efforts led by graduate and undergraduate students, such as a book drive for the UNDH library, a UNDH student scholarship fund, an elementary school outreach program.

“IDCE students on the trip spent time in an environment fueled by sustainable agriculture,” Fernando said. “Through their interaction with the people of Haiti, they grew to understand the importance of decentralization, sustainable development, and governance, and the reason it is all so critical to the rebuilding of Haiti in the aftermath of the earthquake.”

The Field School is also a means of helping the Haitian university develop its capacity to serve its students as well as the poor rural villages. Lessons learned and information gained from the Field School will contribute to a grant proposal that Clark is writing to establish a Research, Development and Advocacy Center for Sustainable Development at UNDH. This center will also house a Center for GIS, which will develop the GIS capacity of UNDH for agricultural research.

“Opportunities to spend time in the field conducting research enables Clark students to apply their knowledge and Clark faculty to ensure their research evolves and incorporates present-day challenges into their scholarship,” said Fernando. Several of those students who flew down right after the quake find themselves still participating in the initiative. Professor Fernando hopes to return with a small group of students soon to continue to develop the partnership with UNDH.